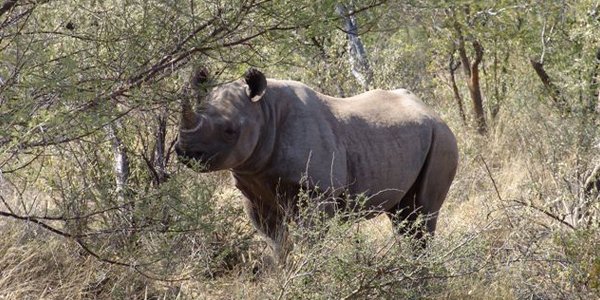 As I’ve discussed in previous blogs, the International Rhino Foundation (IRF) supports a variety of security measures for rhinos in both Africa and Asia, in an effort to protect all five rhino species from poachers. However, as our colleagues in Namibia told us when CeCe and I were observing their important dehorning work: “Monitoring is the most important part of anti-poaching. You can’t get a handle on poaching if you don’t know what you have.”

Luckily, IRF is privileged to work with some of the best rhino monitors out there. After CeCe headed home from our trip (three weeks away from her small children was a lot!), I went on to visit our long-term partners Raoul du Toit and Natasha Anderson of the Lowveld Rhino Trust (LRT) in Zimbabwe’s Bubye Valley.

Over 500 Critically Endangered black rhinos (Diceros bicornis minor) live in Zimbabwe’s Lowveld region. The black rhino population here in Zimbabwe, in addition to being the fourth largest in the world, is important because of high levels of genetic diversity. IRF helps support LRT’s work to preserve and grow this population, as well as the region’s white rhinos, by intensive monitoring efforts and routine and emergency veterinary interventions, helping hundreds of rhinos over the years.

Accurate population information is essential to determine appropriate management interventions, particularly in times of intense poaching pressure. Rhinos in areas suffering poaching losses tend to be overcounted because they move more, possibly in response to their social networks being dismantled through the death of family members. The best way to gain population information is through monitoring individual rhinos.

To do this, all rhinos in the Lowveld are identified through unique ear notches – following an identification standard for rhinos throughout Africa. In the Lowveld populations, every effort is made to ear-notch calves before they leave their mothers so the family connection is known. Raoul and Natasha also use other individual identification tools, like radio-transmitters and transponders, to help their monitoring efforts.

To keep an eye on these important rhino populations, LRT has long employed monitoring teams who track rhinos every day of the year, keeping tabs on their numbers and whereabouts. These employees are dedicated and extremely skilled at their jobs. Some have been with LRT for decades.

The monitors set up field bases so they are close to each area they are working in. They sleep in tents, which have the added advantage of being mosquito, scorpion and snake proof. The field bases are also often fenced to protect the teams from predators such as lions and hyenas, which are prolific in the Bubye Valley.

The monitors depart from their base camp by vehicle early each morning searching for fresh rhino spoor (footprints). Mosquitos and lions aren’t the only critters making their jobs harder, a large flock of guinea fowl can be “a nightmare” according to Natasha, obliterating all signs of rhino tracks! The objective is to locate the rhinos and confirm their identity and health status. Importantly, calves are confirmed through this process, including an estimation of the age of the calf. In most instances, the rhino monitors are able to take photos of the rhinos to confirm the identity and record the body condition and age of the calf if one is present.

Because poaching still occurs here, as it does in many places, LRT also assists rhinos that have suffered bullet and snare injuries with emergency veterinary treatment and boma care. Saving calves that survive poaching incidents depends on swift action, as they can easily become victims of predation by scavengers attracted to the mother’s carcass. LRT has rescued calves as young as ten days old. These orphans are raised under a controlled system with minimized human habituation, improving repatriation efforts to the wild.

Orphans are, whenever possible, raised and released in groups since they prefer company and it reduces their interactions with people. If the LRT team only has a single rhino calf, they will place them with a goat for company! Natasha told me that the goats adore the rhinos and get very depressed when the rhinos are put back in the wild.

But getting orphaned calves back in the wild is the goal, as is monitoring the full population to make sure it’s doing well. It’s comforting to know that such expert, dedicated individuals manage this important population in the Bubye Valley, and it was a real treat to visit Raoul and Natasha there and spend some time in this gorgeous, and ecologically important, landscape.

LRT’s efforts over the past thirty years, and into the future, ensures that the population of black and white rhinos in this region can withstand poaching and other pressures, and maintain a positive population growth for future human populations to appreciate.

Other blog posts in this series:

A Visit to Phinda Private Game Reserve in South Africa

A Flat and Our Heroes