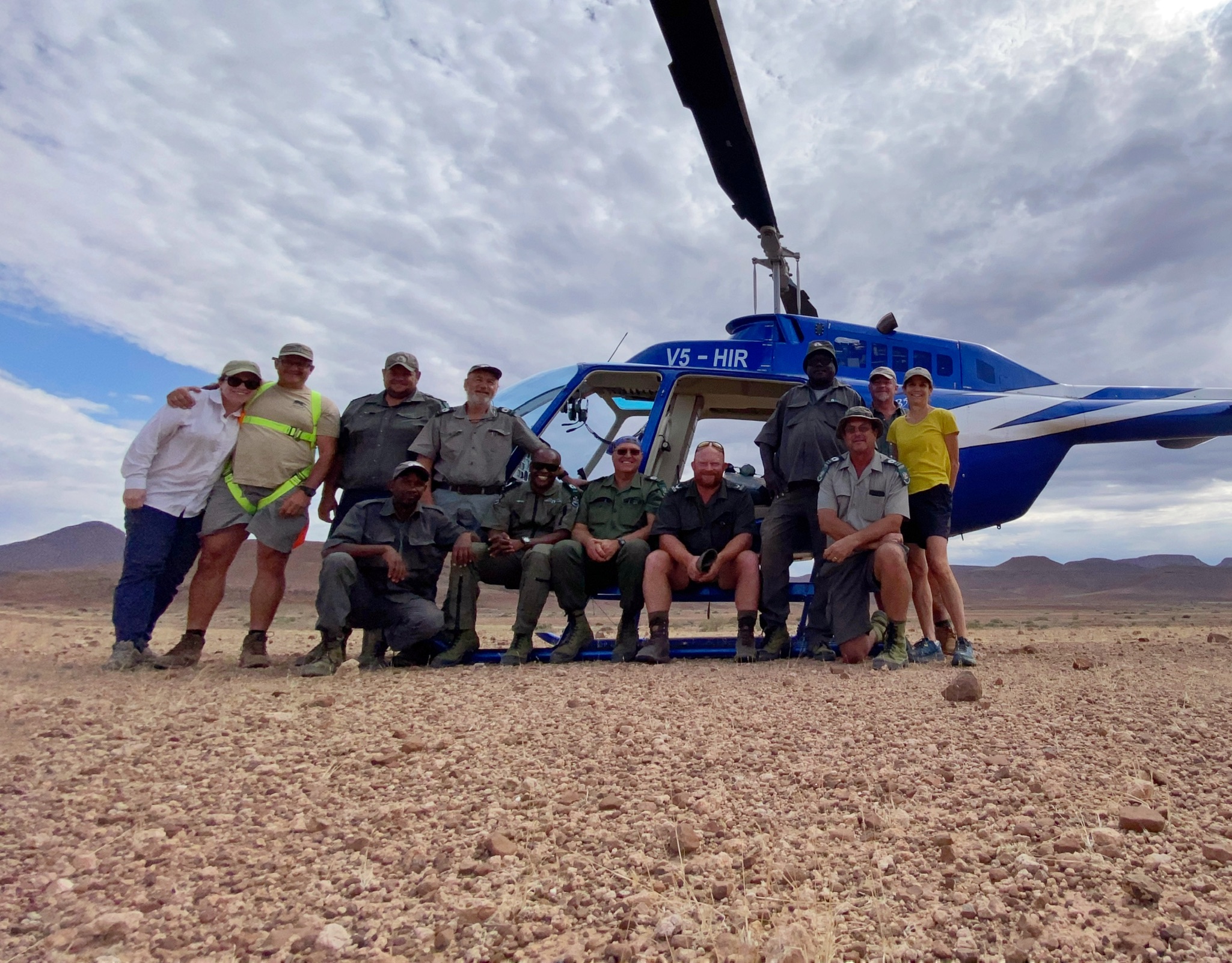 CeCe and I are in Namibia meeting with colleagues who are doing fantastic work protecting white and black rhinos in this country. A collaborative team from the Namibia Ministry of Environment, Forestry and Tourism, South Africa’s Kruger National Park, Wildlife Conservation Network’s Rhino Recovery Fund and Save the Rhino Trust Namibia are gathering to exchange ideas on rhino management issues and conduct a black rhino dehorning operation, a key tool for protecting these valuable animals from poachers by literally removing the incentive to poach. We are fortunate enough to be here for a few days to join them in rhino conservation discussions and observe the dehorning operation – a valuable experience for us, as IRF helps to fund dehorning in other countries.

Namibia is a beautiful nation: many refer to it as God’s Country. This region we are visiting is arid and incredibly vast, reminding me of the American Southwest.* The scenery is awe-inspiring, with mountains rising from the desert for as far as the eye can see. Though the area is very green now thanks to recent intense rains, Namibia has had severe drought conditions for nine years, making life harder for already fragile wildlife populations. Our colleagues here say they are witnessing the impact of climate change firsthand.

But for now, the rains have done what they’re supposed to do – bring new life to this dry region – and today we saw kudu, giraffe, ostriches, rhinos and a large herd of springbok with quite a few babies (Note: when your wildlife biologist hosts get excited to see something, as my guide Tommy did as we passed the springbok herd, you know it’s an exciting find!)

The dehorning work here is conducted by helicopter, and today two teams went in two separate helicopters searching the thousands of hectares where the desert rhino, a subspecies of black rhino (Dicernos bicornis bicornis), resides. Searching for them is like looking for the proverbial needle in a haystack, but these seasoned professionals were able to find a cow, calf and bull. CeCe joined the first team to observe dehorning the bull; they did not dehorn the cow and her calf so as not to jeopardize the youngster in any way.

While CeCe was involved with that exciting activity, I had the opportunity to meet the anti-poaching mules who work here in what is a first of its kind initiative using mules to help rangers track poachers. As a horse person, I was delighted to learn that Save the Rhino Trust Namibia rescues the mules from terrible situations and gives them a good home, excellent food and an important job. I met three mules and rode one, Rooisand, which means red sand in Afrikaans, who was a sweet, if somewhat spunky, animal. The scars on the mules’ bodies from their past lives were heartbreaking to see, but watching the rangers skillfully and lovingly work with and care for them helped restore my faith in humanity.

The mules’ job is to help the rangers traverse this difficult landscape more easily. The ranger-mule teams can even go out on patrol for two weeks at a time – they have constructed a mule trailer with motion-triggered bright lights that, in addition to transporting the teams to remote areas, serves to protect the mules from lions during the night. In another effort to keep the mules safe, the rangers are training them to lie down on command so they can hide if they ever encounter poachers.

Rangers, whether they are human, K9 or mule, are the frontline in rhino conservation work. IRF is proud to support rangers and the vital security work they do in other rhino range countries, and we are pleased to have just made our first grant to rhino conservation in Namibia. The grant, made thanks to a generous donor, the African Rhino Protection Initiative, will support work by Save the Rhino Trust Namibia to establish a rhino ranger program in the San community in northeast Namibia.

This is a very exciting program, as it will not only create jobs in an impoverished community, but will draw on the San’s traditional knowledge in tracking while introducing much of the modern technology used in rhino conservation. The San people have traditionally been left out of mainstream education and formal training, but have tracking skills so powerful they can tell you not only that certain spoor is a recent rhino track, but precisely how long ago the rhino walked by, how often it paused and where it was planning to go. This new program will entail marrying these exceptional skills with training in modern conservation technology to empower the people who live with and know wildlife the best. Team Rhino is growing in important ways!

My next post goes back to our first day in Namibia – stay tuned for “A Flat and Our Heroes.”

*As with many things involving rhinos, IRF helps to protect the species and respect our partners who put their lives on the line fighting poaching by not providing identifying details in our reporting, such as names and exact locations of rhinos. You’ll also note that photos involving rangers never show their faces, in order to protect these courageous wildlife professionals.

Other posts in this travel series are:

A Visit to Phinda Private Game Reserve in South Africa