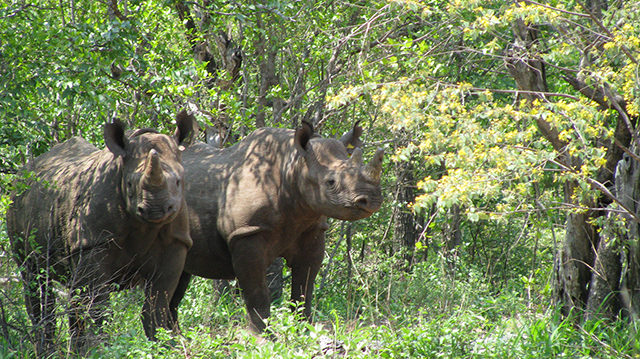 our work>>where we work >> Zimbabwe

Zimbabwe is home to the world’s fourth largest black rhino population after South Africa, Namibia and Kenya.  Organized gangs of poachers slaughtered nearly one-quarter of the country’s rhinos between 2007 and 2009, and poaching remains the greatest threat today driven primarily by demand from Asian markets, particularly Vietnam and China.

Formerly degraded land that was converted from cattle ranges to wildlife management areas, Zimbabwe’s Lowveld region is now home to nearly 90% of the country’s rhino population. These large land tracts operate as wildlife-based businesses that help safeguard a variety of threatened species.

African rhinos can benefit from greater collaboration to combat poaching across borders. LRT is working with TRAFFIC, a leading nonprofit organization combating illegal wildlife trade, to manage wildlife crime data.  Partnerships like these will provide long term solutions to protecting white and black rhinos in Zimbabwe.

Our annual operations in the conservancies include:

Zimbabwe holds the fourth largest population of rhinos in Africa. The country is home to 616 black rhinos and 417 white rhinos. This is the first time that Zimbabwe has surpassed 1,000 rhinos in over three decades. The Lowveld region, which includes Malilangwe, the Bubye Valley Conservancy, the Save Valley Conservancy and the newly restocked Gonarezhou National Park, holds the majority of Zimbabwe’s rhinos.

Zimbabwe has experienced two consecutive exceptional rainy seasons, creating a lush habitat for rhinos and other wildlife. In the first half of 2022, six black and two white rhino calves were spotted in the Bubye Valley Conservancy.

Poaching has also been significantly reduced thanks to intensive monitoring and protection, from a recent high of 77 in 2019 to 10 in 2021. Six poaching incidents have been reported in the first half of 2022. Experts believe that an increase in the illegal trade of gold in Zimbabwe has played a part in reduced poaching for rhino horns, which is viewed as a higher risk activity. Nonetheless, poaching remains the greatest threat for Zimbabwe’s rhinos and protection and monitoring activities must remain strong.

Make An Impact In Zimbabwe

Learn About Black And White Rhinos In Zimbabwe

Protecting African Rhinos In The Face Of A Pandemic

Donate To Protect Rhinos From Poachers In Zimbabwe