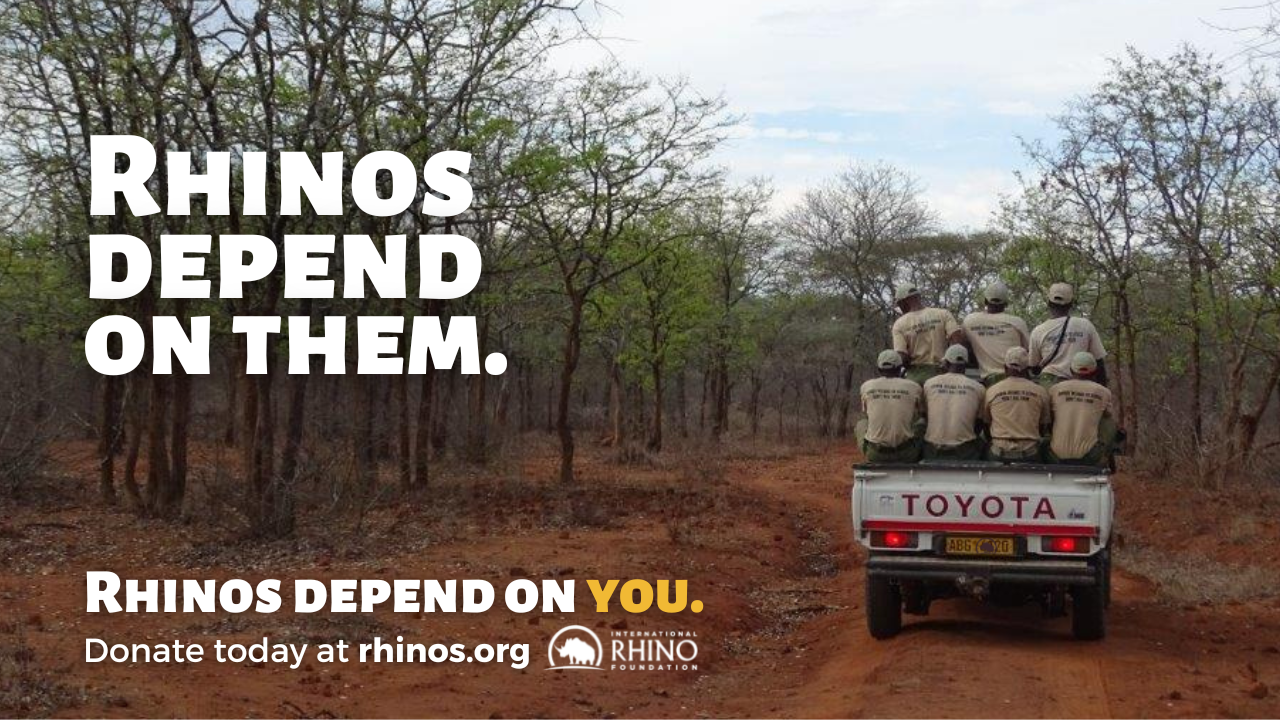 Shrapnel is a 35 year old critically endangered black rhino in the Bubye Valley Conservancy in southern Zimbabwe, where the International Rhino Foundation’s (IRF) local partner, the Lowveld Rhino Trust (LRT), runs rhino management and monitoring operations. Shrapnel was born in the northern part of Zimbabwe, near Lake Kariba, but was translocated out of that area in 1992 as one of the last survivors of the wave of rhino poaching that engulfed the Zambezi Valley in the late 1980s and early 1990s. Shrapnel was named for the bullet scars that monitors found on the left side of his body caused by a poacher’s AK47 bullets.

He has since survived another bullet wound and a deeply embedded snare, and has been translocated two more times for his own safety. But now, in his fourth decade, Shrapnel continues to thrive – thanks to the commitment and dedication of rhino monitors and managers, conservancy security teams, veterinarians – and you.

Rhinos depend on you. Donate today to triple your impact for rhinos and the people protecting them, in Zimbabwe and around the world.

The Lowveld Rhino Trust introduced the first black rhinos into Bubye Valley Conservancy in 2002. The population now numbers over 200 individuals, making it the third largest black rhino population in the world — even after sending 15 rhinos to Gonarezhou National Park last year to help establish a new population there. The success of this population is largely due to good habitat, sound rhino management based on individual monitoring and strong security. Teams of local rhino monitors, hired from neighboring communities, work tirelessly every day of the year to track and identify rhinos. Keeping track of each individual rhino provides detailed information on the population and guides anti-poaching deployments. Combined, these monitoring and anti-poaching patrols detect signs of poaching activity so the conservancy can respond quickly and effectively to new poaching threats and reduce rhino deaths.

Today, on Giving Tuesday, we’re trying to raise $56,000 to fund 10 rhino monitors in the Bubye Valley Conservancy for one year. Can you help?

Monitoring teams operate from field bases in the conservancy, sleeping in tents. (The field bases are normally fenced to protect people from lions and hyenas.) The units deploy from base camp by vehicle early each morning, searching for fresh rhino spoor (tracks) near water sources. Once they find fresh spoor, the monitors follow the rhino tracks on foot. Their objective is to locate the rhinos and confirm their identity and health status — by observing their body condition, checking for injuries and recording their behavior — and to find any new calves.

The intensive rhino monitoring program has helped keep this rhino population safe and growing, despite enormous poaching pressure across the continent that has led to the deaths of at least 2 African rhinos on average every single day for the past decade. But as the cost of food and fuel has soared in Zimbabwe and other rhino range states, it’s becoming increasingly difficult to maintain current rhino monitoring and protection initiatives.

By contributing to IRF today, you’ll help keep rhino monitors in the field in Zimbabwe and throughout Africa and Asia.

Three generous IRF supporters have agreed to match every gift you make, dollar for dollar, today. That means your gift will go three times as far and make triple the impact for rhinos and their protectors.

Please join us today to ensure that rhinos like Shrapnel will survive and thrive in the wild. Thank you!