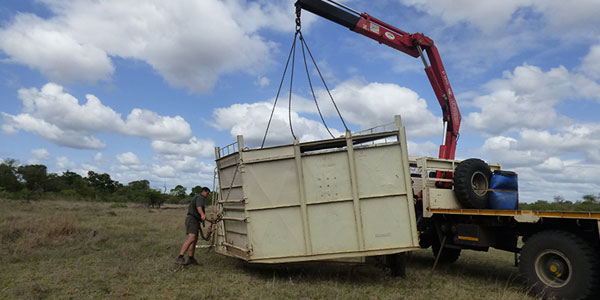 With fewer than 80 remaining, Sumatran rhinos face a real danger of extinction without successful interventions. Under the guidance of the Government of Indonesia’s emergency action plan, an alliance of international conservation organizations, including IRF, has launched Sumatran Rhino Rescue, a phased, multi-year undertaking to save the Sumatran rhino. We plan to consolidate reproductively viable animals from the widely dispersed, fragmented wild populations into managed breeding facilities, like the Sumatran Rhino Sanctuary. Rhinos will be bred in captivity and, once limiting factors are under control, will eventually be reintroduced into protected areas in the wild. In this blog series, we will explain each step and give examples of how past experiences around the world will help guide the implementation of this plan.

Step 1 of this series talked about conducting surveys so we can determine the locations of isolated rhinos, developing plans for, and then implementing captures using pit traps.

Step 2 covers the logistics of translocations– why rhinos are moved, how their new homes are chosen, and how translocations will help save the Sumatran rhino.

Here in Step 3, we’ll look back at the successes in Sumatran rhino captive-breeding and how what we have learned can help rebuild the population and save this species from extinction.

A Look Back at Sumatran Rhino Captive-Breeding Efforts

In the mid-1980s, when the wild Sumatran rhino population was thought to be fewer than 500, conservationists from around the world developed a collaborative plan to stabilize and rebuild the population through captive-breeding programs. From 1989-1993, 35 rhinos were captured in Malaysia and Indonesia and moved to several zoos and breeding centers in Sabah Malaysia, Peninsular Malaysia, Indonesia, the UK, and the US in the hopes of increasing their numbers through managed breeding. None of the 13 facilities in the world that housed Sumatran rhinos from 1984-1999 were successful in breeding them. The Sumatran rhino is not just a unique species- it’s in its own genus, Dicerorhinus, separate from all other living rhino species. This means that Sumatran rhinos’ behavior, nutrition, and reproductive physiology is different from everything animal care experts already knew about other rhino species — there was a steep learning curve to mastering their nutrition and husbandry, much less their reproduction.

In the history of Sumatran rhino captive management, only two facilities in the last century have been successful in breeding this species — the Cincinnati Zoo & Botanical Gardens in the United States, and the Sumatran Rhino Sanctuary in Way Kambas National Park, Indonesia.

The Cincinnati Zoo & Botanical Gardens was one of the first US facilities to receive Sumatran rhinos in the mid-1980s, one of only two facilities that housed more than one animal. The Sumatran Rhino Conservation Center in Peninsular Malaysia held five individuals; the Cincinnati Zoo and Botanical Garden held three animals, but it wasn’t until 2001 that the first calf was born.

The turning point for the Sumatran rhino captive-breeding program occurred when Dr. Terri Roth (IRF’s Vice President for Asia Programs), left the Smithsonian’s National Zoo to join the Cincinnati team in 1996 as a reproductive specialist. Intrigued by the Sumatran rhino, Dr. Roth focused all her efforts on Ipuh and Emi, the male and female living at Cincinnati Zoo. Dr. Roth’s determination to study Emi’s reproductive cycle led to the breakthrough discovery that, unlike other rhino species, Sumatran rhino females are induced ovulators – meaning they only cycle in response to interaction with a male. This observation ended up being one of the keys to breeding Sumatran rhinos – and on September 13, 2001, a male rhino named Andalas was born – the first captive birth of a Sumatran rhino in 112 years. Timing was everything. Cincinnati Zoo staff closely monitored the female’s behavior and monitored her ovarian follicle development, incorporating new knowledge into what has become a tried-and-true method for natural breeding. The team at Cincinnati was able to duplicate this success with Ipuh and Emi two more times: a female, Suci, was born in 2004, and Harapan, a male, was born in 2007.

Meanwhile, on the other side of the planet, a sanctuary in the rhinos’ natural habitat had been established and rhinos from throughout Indonesia were consolidated there. In time, Cincinnati’s breeding successes would have an even bigger impact on this sanctuary and the future of Sumatran rhinos.

In 1995, IRF and our partner, the Rhino Foundation of Indonesia (Yayasan Badak Indonesia, or YABI) began construction on the SRS in Way Kambas National Park. It had been long thought that Way Kambas held no rhinos, until a tiny population was discovered on camera traps set for tigers. These photographs provided the first evidence that between one dozen and two dozen rhinos were thriving in virtual seclusion in the park.

The 250-acre semi-wild SRS would provide the opportunity to house rhinos in their natural habitat while still being able to provide them protection from poachers, provide state-of-the-art veterinary and husbandry care, and if successful, an opportunity to reproduce. For many years, the facility held animals with little or no chance of breeding. That changed when two females, Rosa and Ratu, wandered out of the forest and were transferred to the sanctuary.

Shortly after Rosa and Ratu arrived at the SRS, the decision was made to move male Andalas from the Cincinnati Zoo to the SRS in hopes that he would mature into a breeding male. No one knew if a rhino born in captivity would be able to learn natural breeding behaviors and successfully produce offspring, but on June 23, 2012, Andalas and Ratu became parents to the first Sumatran rhino calf born in an Indonesian facility in 124 years, a male, Andatu.

In 2016, the world was delighted again when female calf Delilah was born — the second Sumatran rhino calf born at the SRS, and the second for Andalas and Ratu. Using the methods perfected in Cincinnati, and with assistance from veterinarians and scientists from Cincinnati, White Oak Conservation Center, and Taronga Conservation Society Australia, the YABI and IRF teams have created a successful captive-breeding program at the SRS.

Over the last century, there have been only five Sumatran rhinos born in captivity, with four of them now living at the SRS. It all started with Andalas and it all was made possible because of Dr. Terri Roth and her team at Cincinnati, as well as the talented veterinary team at the SRS. And now, the future of this species depends on those breeding successes.

SUMATRAN RHINO RESCUE BREEDING PROGRAM
The breeding successes at the Cincinnati Zoo and the SRS have become a model for the Sumatran Rhino Rescue and the Government of Indonesia’s Sumatran Rhino Emergency Action Plan. The SRS facilities and management practices will be replicated in two other locations in Indonesia to accommodate the rhinos that will be rescued from surrounding areas and the offspring they produce (one in Indonesian Borneo, and one in the Gunung Leuser ecosystem in northern Sumatra). In addition to the new facilities, the SRS is undergoing an expansion that will include new quarantine facilities for incoming reproductively viable rhinos from the wild, large, natural pens, and new maternity areas for any future cows and calves.

Between these three facilities, the Sumatran rhinos will be managed as a meta-population, meaning that they will be treated as one large breeding group to increase the chances of successful rhino births and strengthen the genetic diversity of the population over time.

With a gestation of around 16 months, a female Sumatran rhino gives birth only every 3 to 4 years– meaning that even in perfect conditions it will take a long time, maybe even decades, to rebuild this population to sustainable numbers. IRF has already been involved with Sumatran rhino care and conservation for more than 25 years, and we have made a long-term commitment to ensure this species’ survival.

Next month, we’ll be wrapping up this series with a discussion on REINTRODUCTION. The end-goal for this project is to be able to return enough rhinos to protected areas in the wild so that their population can re-establish and begin to grow. It’s important to note that throughout this process, protection for the rhinos remaining in the wild will never stop – it is critical that we preserve these populations and their natural habitat while their numbers are being increased in the captive-breeding program.

This is an audacious plan that requires a lot of time, work, and resources, but we think it’s worth it. If you’d like to be a part of saving the Sumatran rhino from extinction, please consider making a tax-deductible donation here and help us save this magnificent species…while we still can.