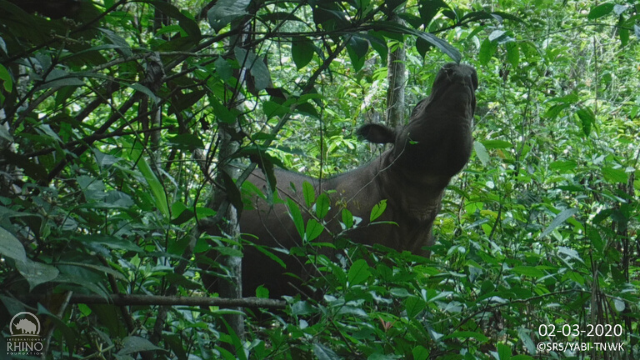 The first step is to conduct surveys so we can determine the locations of isolated rhinos and develop plans for captures. Read more about surveys here.

Once the surveys have been conducted and a plan devised, it is time to prepare for the rhino capture. The capture team coordinates with the transport team and with the location receiving the rhinos so that everyone is prepared and the entire process can happen as quickly and smoothly as possible.  Rhinos are transported from one place to another in crates, but how do you get a wild rhino into a crate? That mostly depends on the type of rhino and where they live.

In Africa, black and white rhinos are frequently captured and translocated, either to establish new populations, or to move rhinos from high-risk areas to safer habitats. Our partner in Zimbabwe, the Lowveld Rhino Trust, has safely and successfully moved many rhinos.  These captures require chemical immobilization by a veterinarian to ensure the safety of the rhino and the people working around it. There are multiple teams of people involved in a rhino capture. The ground team first attempts to locate the rhino, and in some cases, a fixed-wing aircraft may be called to assist. Once the rhino is located, a helicopter pilot will fly a wildlife veterinarian as close as possible to the animal so a dart-gun can be used to shoot a syringe of immobilizing drugs – the vet has to be a very good shot! Immobilizing drugs take a few minutes to take effect, so when first hit by a dart, a rhino will often continue to run. The aircraft in the sky keeps an eye on the animal’s location and communicates back to the mobile ground teams so that they can follow the rhino and easily find it once it’s sedated.

Ideally within a few minutes, the rhino has laid down and the ground teams quickly move in and start getting all the equipment in place. The first priority is checking the rhino’s vitals like temperature, pulse, blood oxygenation levels – these will continue to be monitored the entire time the rhino is under anesthesia. Depending on the specifics of the plan, a rhino may have its horn trimmed, or be fitted with a radio collar or transmitter at this time as well. While the veterinary team has been tending to the rhino, another team has been getting the crate and other equipment in place. Weighing on average 4,000 to 5,000 pounds, a sleeping rhino can be near impossible to get into a crate without heavy machinery. Due to the terrain however, heavy machinery isn’t always an option, so often the open crate is placed right in front of the rhino before the veterinarian administers the anesthetic reversals. As the rhino wakes up and is still groggy, it can walk straight into the crate and the translocation process can begin.

A Different Capture Method for Sumatran Rhinos
In Indonesia, it is a very different process in that Sumatran rhinos are not chemically immobilized. The dense canopy of the jungle means that there is no way to see the rhinos from above so all work has to be carried out on the ground. Even if they were able to find a Sumatran rhino on foot, the rhinos are so wary of people that a veterinarian wouldn’t be able to get close enough to attempt to dart it- and if they did, the rhino could run off and easily disappear into the thick vegetation, making it nearly impossible to find again.

Pit Traps
The most effective way to capture a Sumatran rhino is by building a pit trap. After a location has been carefully selected, a small team will begin digging with only manual tools. This team is specially trained and has very specific dimensions for the final product, reinforcing the sides as they dig. The end result is essentially a solid box in the ground that won’t cave in and has a muddy bottom to cushion the fall of the rhino. A solid top must be kept on the trap until all the teams are ready to go – once a trap is opened there must be veterinary teams, rangers, and transport staff constantly on-call, ready to respond as quickly as possible.

Once opened, the trap is covered with branches and foliage to camouflage it and the waiting game begins. The traps are checked daily but sometimes it can take months of waiting and several traps to catch just one rhino. As soon as a rhino is confirmed to be in the trap, a veterinarian arrives on site to assess the rhino’s health and demeanor. Once the transport team gets the crate in place next to the pit trap, everyone gets ready to move the rhino.

But how do you safely get a rhino out of a hole in the ground? The support walls of the pit are the key. Sections of the wall closest to the crate opening are slowly removed so that dirt starts to enter the pit from one side. In this way, a natural dirt ramp is created leading right up to the crate opening so the rhino can walk up the ramp and into the crate on its own, ready for the next step: translocation.

In December 2018, a rhino called Pahu became the first official capture of the Sumatran Rhino Rescue project. Pahu’s home range on Indonesian Borneo was being encroached upon by miners and poachers so time was of the essence to capture her and get her to safety. Our partner WWF Indonesia successfully managed Pahu’s capture and is currently overseeing her care. We all share the hope that Pahu will eventually be able to produce a rhino calf as part of the new national captive breeding program for Sumatran rhinos.

Capturing and moving Sumatran rhinos into the breeding program will be a long and potentially challenging process. IRF has almost 30 years of experience in Sumatran rhino care and conservation and we are committed to keeping this species from going extinct.

If you’d like to support this mission, please consider making a tax-deductible donation here and help us save Sumatran rhinos…while we still can.

Stay tuned for the next blog post in the series that will cover TRANSLOCATION — where are the rhinos going and how will they get there?

2 thoughts on “The Plan to Save Sumatran Rhinos: Capture”