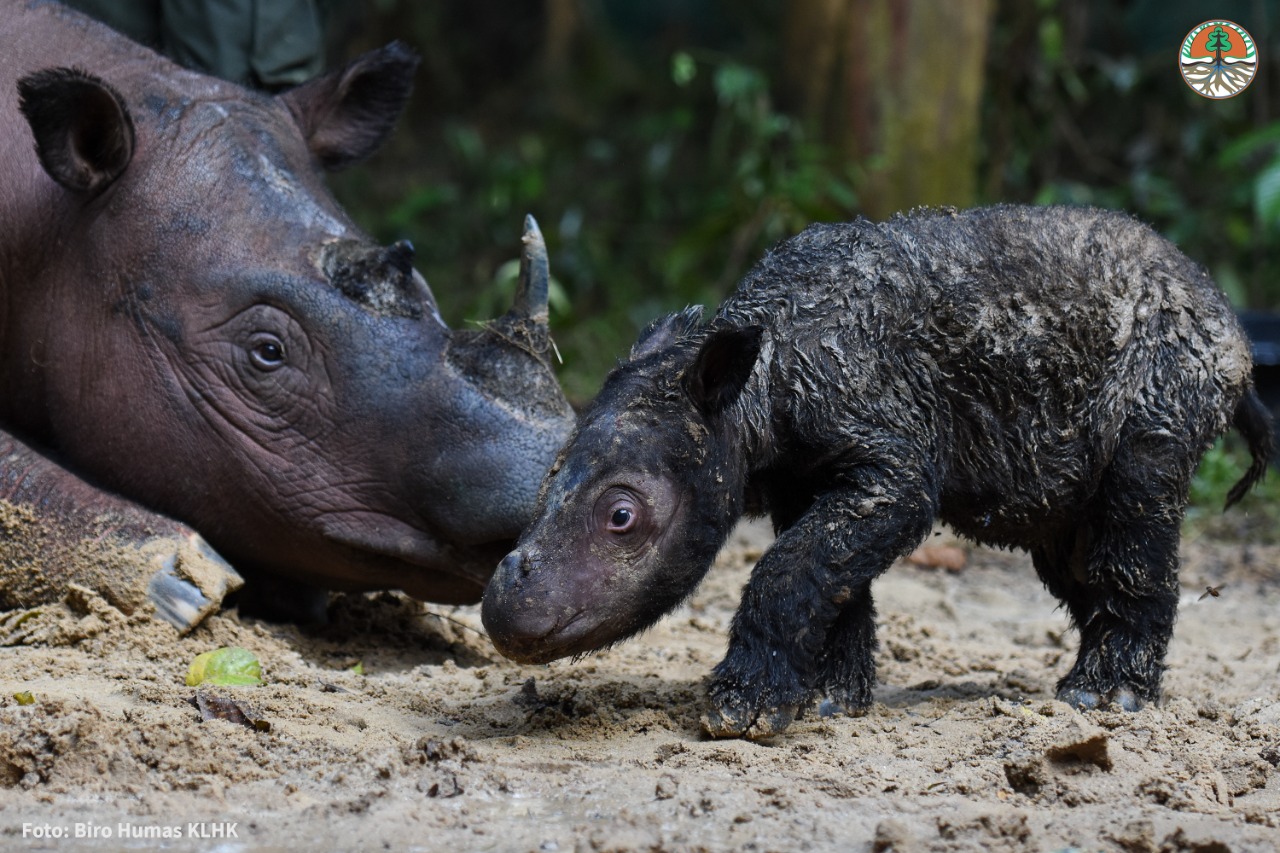 The Director General of Natural Resources and Ecosystem Conservation of the Ministry of Environment and Forestry (MOEF), Wiratno, announced that the mother is Rosa, and the father is Andatu, the first calf ever born at the Sumatran Rhino Sanctuary. The birth of Rosa’s calf has increased the number of rhinos at the SRS to eight. In addition to Rosa, other rhinos currently occupying the SRS are Bina (female), Ratu (female), Andalas (male), Harapan (male), Andatu (male), and Delilah (female).

“The birth of the Sumatran rhino is good news amid the efforts of the Indonesian government and partners to increase the Sumatran rhino population,” said Wiratno. “My deep gratitude for the work of the team of veterinarians and keepers who have continuously monitored the development of rhino Rosa’s pregnancy and postnatal care.”

The entire birth process, as well as the postnatal health of the mother and calf, is supervised by a team of SRS veterinarians from the Indonesian Rhino Foundation (Yayasan Badak Indonesia, or YABI), led by Dr. Zulfi Arsan and including Dr. Ni Made Ferawati, Dr. Aprilia Widyawati, and Dr. Vidi Saputra.

The SRS Vet team was also assisted by animal keepers Sugiyanto, Soca Adi Fatoni, and Lamijo. A team of veterinarians consisting of Dr. Dedi Candra from the Directorate General of KSDAE, Ministry of LHK, Dr. Diah Esti Anggraini from the Gajah Balai Way Kambas National Park Hospital and Dr. Bongot Huaso Mulia from Taman Safari Indonesia was also on standby for Rosa’s delivery and postpartum care. Support from the international community was also provided by Dr. Scott Citino from White Oak Conservation and senior animal keeper Paul Reinhart from the Cincinnati Zoo and Botanical Gardens to assist the SRS team of veterinarians, if needed.

This birth was particularly momentous as Rosa had lost eight pregnancies prior to this birth. Additionally, this is the first Sumatran rhino born from a parent, in this case, Andatu, who was himself born in the conservation breeding program. “Rosa’s pregnancy represents new hope for this Critically Endangered species,” said Nina Fascione, executive director of the International Rhino Foundation (IRF). “Today’s announcement is the result of the dedication by the Ministry of Environment and Forestry to the Indonesian government’s national rhino breeding program.”

In 1996, IRF funded the building of the 250-acre Sumatran Rhino Sanctuary in partnership with YABI, who currently manages the SRS, the MOEF, Way Kambas National Park and Taman Safari International. “The Sumatran Rhino Sanctuary in Way Kambas National Park is the only place for the Sumatran rhino to breed naturally with the support of technology and collaboration of expertise, both from within and outside the country. The SRS seeks to produce as many young Sumatran rhinos as possible, according to safe conditions to maintain the survival of the Sumatran rhino species which is now threatened with extinction,” said Wiratno.

Unlike most Sumatran rhinos, Rosa exhibits none of the shy, solitary behavior normally associated with her species. Beginning in late 2003, Rhino Protection Units (RPUs) working in Bukit Barisan Selatan National Park in western Sumatra began receiving reports from local villagers that a young Sumatran rhino had frequently been observed walking along one of the main roads crisscrossing the park and browsing for vegetation in villages around the park boundaries. These reports were extremely unusual – as a rule, Sumatran rhinos are shy and secretive, avoiding humans and their settlements at all costs, preferring to live in thick, isolated forests and moving mostly by night. Rosa, however, somehow became used to being around humans and became extremely comfortable living and feeding in close proximity. Unfortunately though, this unique behavior put her in danger.

Immediately upon receiving the reports about Rosa, the Rhino Protection Units swung into action and began tracking the rhino, looking for footprints, dung, wallows, and other typical rhino signs. They soon found Rosa, and a special unit was permanently assigned to observe and protect her.

After a number of discussions between the Indonesian authorities, park officials, veterinarians and rangers, it was finally decided that Rosa’s behavior continued to put her at too much risk. In 2004, she was moved to the SRS where she could be better protected. At the sanctuary, the rhinos reside in large, open forest areas where they can experience a natural habitat while still receiving state-of-the-art veterinary care and nutrition.

Rosa adapted well to her life at the sanctuary, and still exhibits all of the behaviors that make her so unique.  She is a particularly loud rhino, and often vocalizes, especially when people are close by, or when her regular feeding time is approaching.  Rosa also likes to “sing” when she is happily wallowing in her mud holes.

The father of this calf is Andatu, the first rhino ever born in captivity in Indonesia. Andatu is almost 10-years old and recently reached sexual maturity. His birth in 2012 was the historical culmination of robust international cooperation. Andatu’s father, Andalas, was born at the Cincinnati Zoo & Botanical Garden on September 13, 2001, and came to Indonesia when he was six years old. Andatu’s mother, Ratu, was born in Way Kambas National Park, but wandered outside the park’s boundaries in 2005 and was brought to the SRS.

Andatu’s name is a combination of his parents’ names and means “Gift from God.” The second birth at the SRS was his little sister, Delilah, born in 2016. This newborn calf is the first offspring for both Rosa and Andatu, greatly expanding the potential for the future of the conservation breeding program. The calf is also the third-generation captive-born Sumatran rhino, the first ever recorded for this species.

“With the birth of the calf of Rosa at SRS, we hope to continue to receive happy news from the births of other Sumatran rhinos in the future,” concluded Wiratno.

IRF will continue to provide regular updates from the MOEF and the SRS about Rosa and her calf via our website at Rhinos.org and social media outlets.

“IRF would like to thank the government of Indonesia, YABI, Sumatran Rhino Rescue, and our partners and donors around the world for working together to save the Sumatran rhino for future generations,” said Fascione. “This is a momentous occasion for a critically imperiled species. We share the excitement of this birth with the world!”