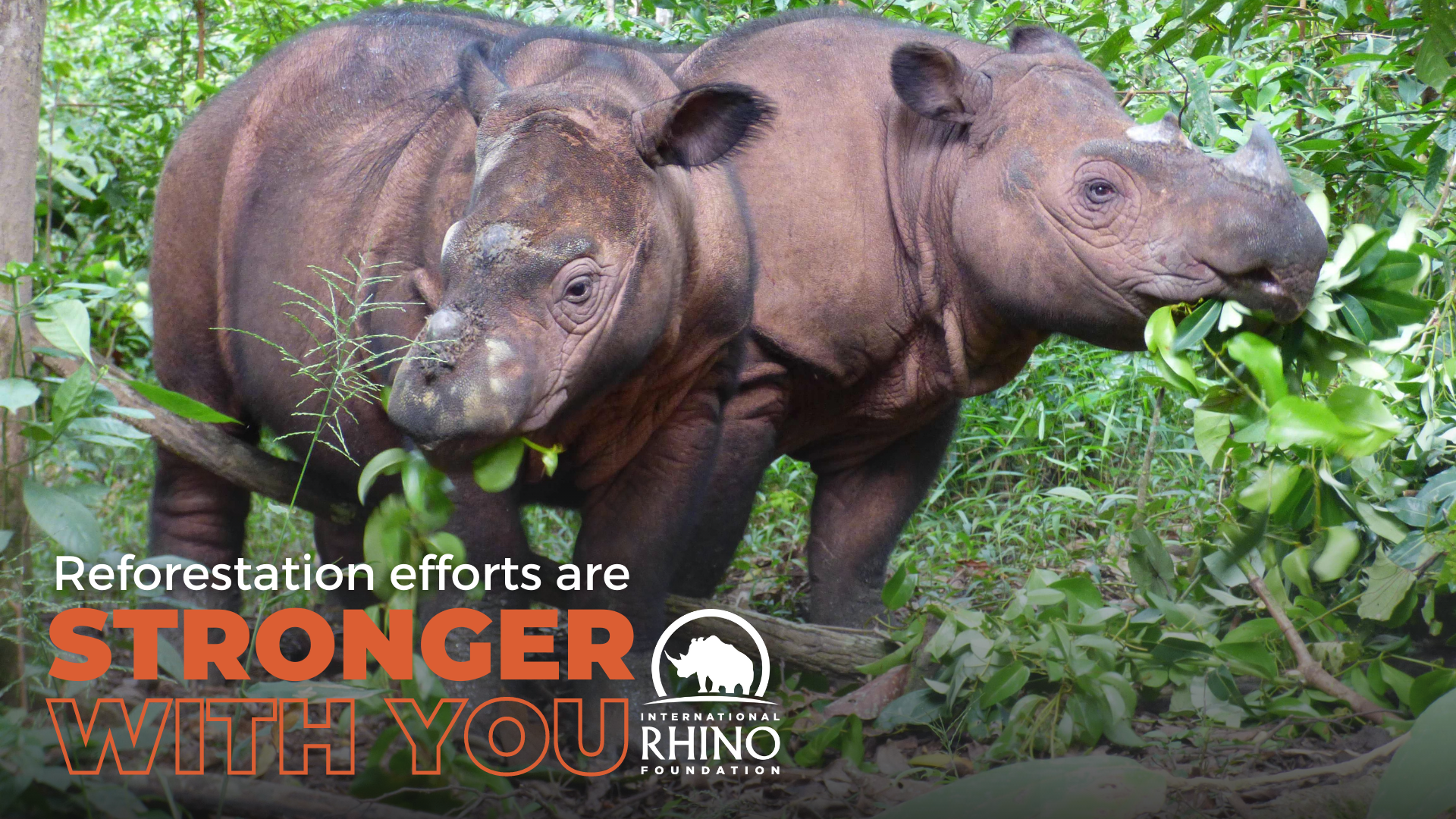 A vital part of any conservation effort is ensuring that animals have enough protected, suitable habitat to grow their population. A few years ago, we began supporting an initiative of the Indonesian Ministry of Environment and Forestry to replant and restore sections of Way Kambas National Park to create more forested space for Sumatran rhinos and other wildlife.

Together, we spent a year preparing the reforestation site, building a guard post and well, and growing and planting seedlings. Then, late last year we received the news that a raging forest fire had swept through the reforestation site in Way Kambas, wiping out all of the 15,000 seedlings we had planted – in less than an hour. All that hard work had gone up in flames. Our entire team was heartbroken.

But within weeks, thanks to your ongoing support, we were back at work. And now, just over a year later, in partnership with the Indonesian government and local farmers, we’ve planted double the original number of seedlings at two different sites within Way Kambas.

This is the reality of conservation work. We face constant setbacks – fires, tsunamis, surges in poaching and illegal trade, and now a global pandemic and significant loss of conservation funding. Despite the difficulties, IRF and our local partners around the world keep going, thanks to you.

After the fire in late 2019, we began replanting our first reforestation site and working with park officials to identify a second plot. They decided on a new area that is located next to prime habitat for rhinos, elephants, tigers and other wildlife but also lies in close proximity to a local village. Villagers often collected fruits and other resources from the forest. We had to find a mutually beneficial solution for both people and wildlife.

Mr. Rusdianto, Way Kambas National Park coordinator and supervisor for forest farmer groups, recommended involving the local community directly in the reforestation effort. The park hired local farmers to grow the new seedlings to replant the site and local workers, including individuals with disabilities, to plant seedlings and maintain the area. Tall grass that can burn easily in a forest fire is mowed daily. A water pool has also been built to respond to potential fires. Seedlings are also tended to daily and dead plants can be replaced with reserve seedlings being grown at an onsite nursery. Most of the 50 acre area has now been planted with seedlings thanks to the support of Team Rhino.

The trees should grow to maturity in just four or five years, providing food for rhinos and other wildlife. Many bird species, deer, and predators are already returning to the area – a promising sign. Additional workers will be hired to harvest browse from mature trees to feed the rhinos at the nearby Sumatran Rhino Sanctuary.

The important restoration project in Way Kambas National Park will play a crucial role in securing a future for iconic species such as the Sumatran rhino. A healthy ecosystem will provide food for humans and wildlife, protect against wildfires, and improve the health of all. IRF is proud to stand with the Indonesian government and local communities working to make a better future for wildlife and people, together.

By making a contribution to IRF today, you’ll help ensure that this inclusive, community-led reforestation program will benefit wildlife and people for years to come. Your tax-deductible gift made by Dec 31st will be matched – dollar for dollar – by a long-time donor.