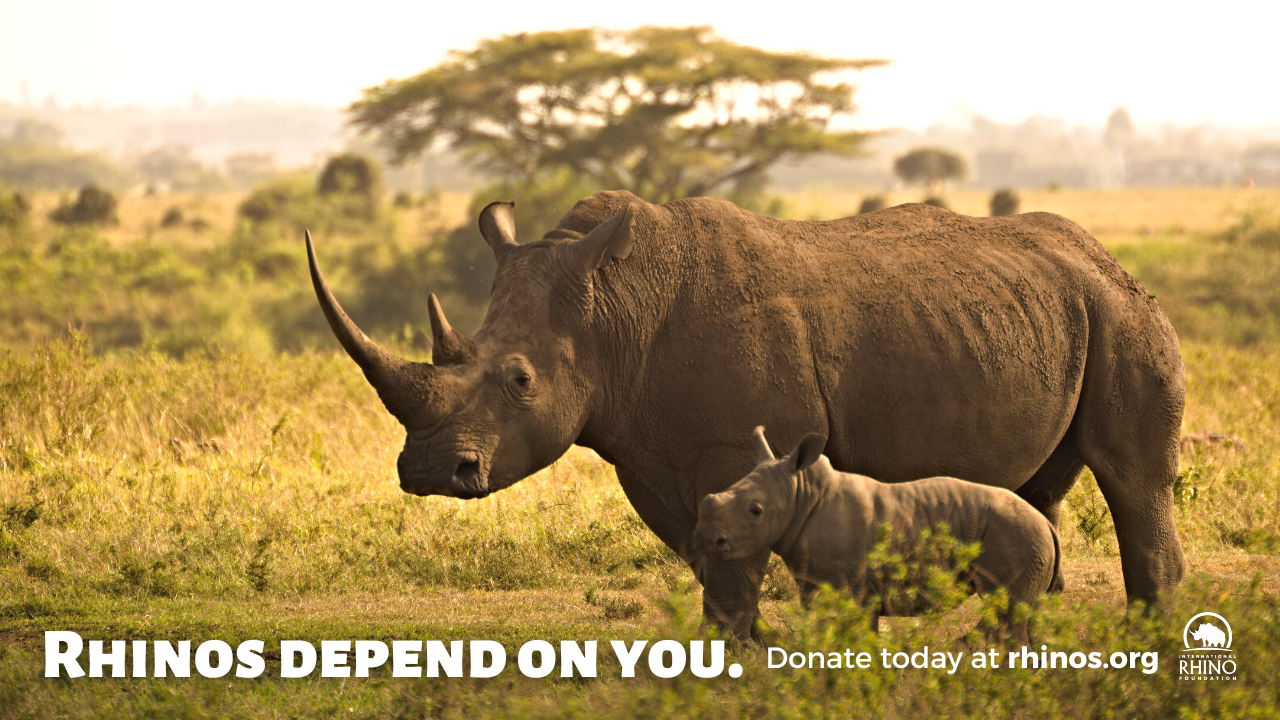 More than 2 rhinos have been killed every single day for the last decade in Africa to fuel the illegal trade in rhino horn. Over the last 10 years, rhino horn trafficking networks have become more adaptable, strategic, well-funded and dangerous. They are changing poaching methods, using new technologies, finding alternative trade routes, and aggressively targeting rangers and law enforcement.

The need to constantly respond to these changing poaching tactics and threats puts relentless pressure on rhino reserves and range country governments, who are often constrained by a lack of funding and capacity.

It’s a complex problem that requires a comprehensive, multi-faceted solution.

That’s where you come in.

The work of the International Rhino Foundation is essential –  we protect all five species of rhinos and other species that share their habitats, we provide sustainable incomes to local communities in Africa and Asia, we mitigate the effects of climate change by replanting degraded forests and grasslands – and your donations help support more than 400 rhino staff in 11 countries.

We need your help to raise $645,000 during these last few weeks of the year to maintain our current rhino programming. A generous, long-time IRF donor has agreed to match every gift you make, dollar for dollar, from today until December 31st. That means for the rest of this year, your gift will go twice as far and make double the impact for rhinos and the communities living with them!

The International Rhino Foundation is building on past successes and implementing a wide variety of solutions to combat the rhino poaching crisis and protect rhinos across Africa and Asia. Because of you, we provide invaluable support to rangers, security managers, and investigators working to monitor and protect rhinos and investigate and prosecute wildlife crimes. With your support, we help local communities working to restore rhino habitats, researchers working to solve critical conservation questions, and the scientists and veterinarians who are breeding rhinos and reintroducing them to areas from which they’ve disappeared.

Because of you, IRF and our local partners have accomplished so much already this year:

We cannot protect rhinos without you, and like so many nonprofit organizations, we are facing an incredibly difficult time due to the global economic situation. The cost of food and fuel has soared in rhino range states, and it has become increasingly difficult to maintain current rhino protection initiatives. Please consider making a donation to the International Rhino Foundation to ensure a future where all five species of rhino survive and thrive.

Rhinos depend on us, now more than ever, and we depend on your generosity to keep our comprehensive rhino protection programs going.

Rhinos depend on you.