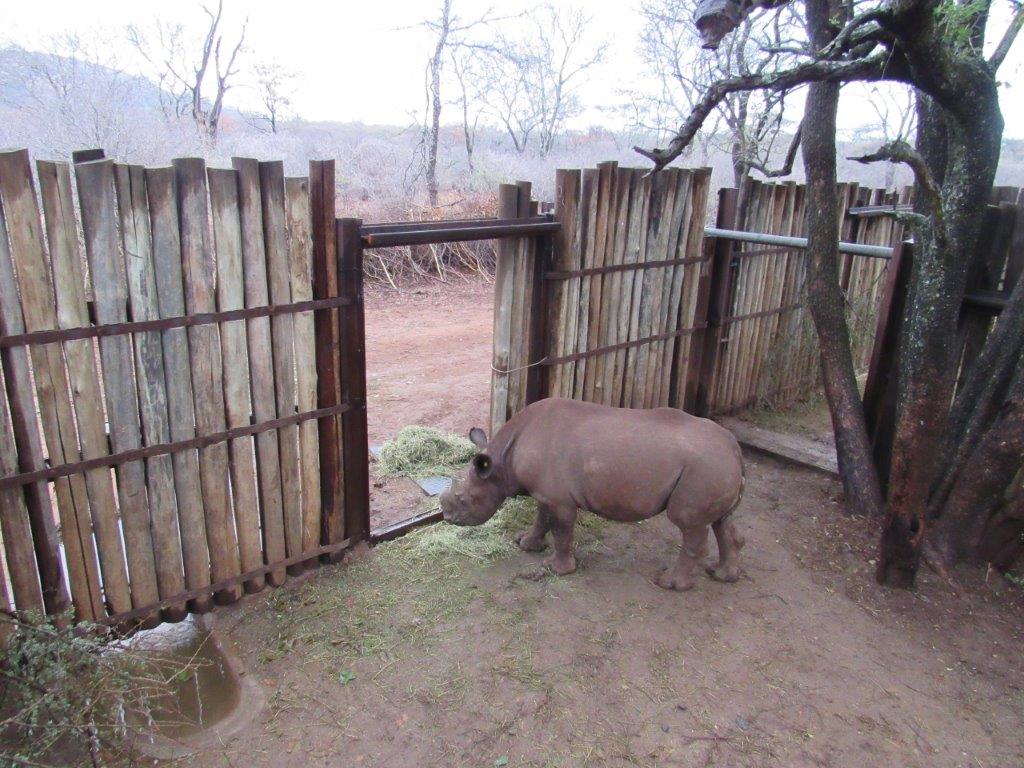 In July 2020 on a routine patrol, monitors from the International Rhino Foundation’s (IRF) partner, the Lowveld Rhino Trust (LRT), noticed a young black rhino calf that appeared to be injured, wandering in the bush of the Bubye Valley Conservancy in Zimbabwe.

Approximately 16 months old, the female calf had been orphaned after her mother was killed by poachers. It was apparent that her leg had been injured, but the severity of the wound was unclear. Acting quickly, LRT organized her capture and flew a vet down from Zimbabwe’s capital, Harare.

The team set out to immobilise the calf in order to assess and treat her wounds. The calf had been shot with a heavy calibre rifle and her injuries were quite severe. Her wounds were cleaned out and antibiotics were administered to help fight any infection. She was then taken to specially constructed rhino bomas to continue to be cared for by LRT staff and to recover in safety away from lions and hyenas.

“Although she was obviously scared without her mother and in considerable pain, this little girl had enough personality and the fight for three rhinos,” said Natasha Anderson,  IRF’s Zimbabwe Monitoring Coordinator.

IRF recently released in its State of the Rhino report that in Africa, the black rhino population had a small increase to 5,630 from 5,500 in 2019. The species remains critically endangered and at a fraction of the 65,000 historical population level in 1970. Only about 2,300 remained in the early 1990’s, and the population is forecasted to continue to make small gains.

In Zimbabwe’s Bubye Valley, a 13.8% population growth was reported during the first 6 months of 2020. Rhinos in Africa are dependent on protection and monitoring personnel for their continued safety LRT’s monitoring program is crucial. If you don’t know exactly how many rhinos are out there, it’s impossible to determine the level of poaching or its impact on protection efforts.

Rhino tracking teams begin work very early in the day, searching for signs that will help them determine the best direction in which to move. In addition to electronic tracking equipment, they carry cameras and data sheets that allow them to identify and record potentially every rhino in the conservancies.

Upon arrival Pumpkin attacked the boma gate so violently that she broke her horn off. Although it caused worry that she might hurt herself, the LRT team became more confident that she would recover from her bullet wounds because she was displaying what a fighter she was. This one wasn’t giving up…

The LRT team spent many hours alongside her boma to gain her trust, making soothing ‘rhino’ noises so that she would not feel so alone. She was called Pumpkin for the soothing sound of the word. Twice a day food was brought to her providing a comforting and stable routine.

She became known as ‘Princess Pumpkin’ due to her very fussy eating habits and the hilarious mini tantrums she would throw if anything was off schedule. Pumpkin’s favourite antic was to throw her food bowl, made from an old rear tractor tire, upside down so that she could eat her favourite bits at the bottom first.

After six weeks of daily care, her leg was healthy and her attitude was strong, it was time to release her back into the wild. During her stay in the boma she had been receiving secret night visits from a wild rhino named Rocky, a former orphan as well. In the mornings you would see his spoor where he had been circling her enclosure.

A few days after Pumpkin was released LRT rhino monitors found her spoor with Rocky’s. It is likely that they will join up and live together, both finding the company they craved at last since tragically losing their mothers to poaching.