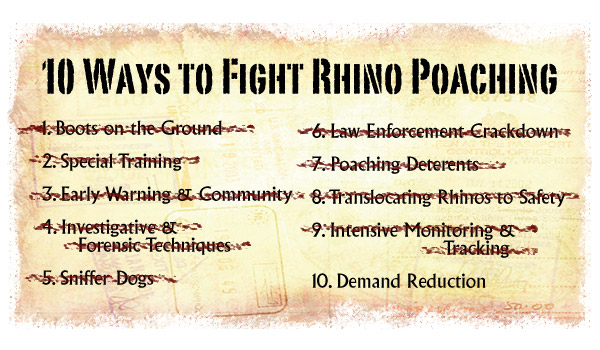 Holding an H-bar radio antenna in front of him at chest height, Freedom Ncube walks softly along the narrow trail that snakes through the tall grass and almost disappears into the thick surrounding brush. This same trail is used — maybe just recently — by the rhino he is tracking, possibly a lion or leopard, or perhaps even an angry buffalo. The “beep … beep … beep” that emanates from the receiver tells him that the rhino is close — close enough that he and his team must take care not to spook it. That could be dangerous. Ready with small cameras, Freedom’s brother Lawrence and co-worker Hence make up the tracking team. They are led by Natasha Anderson, who coordinates the monitoring program for Zimbabwe’s Lowveld Rhino Trust. 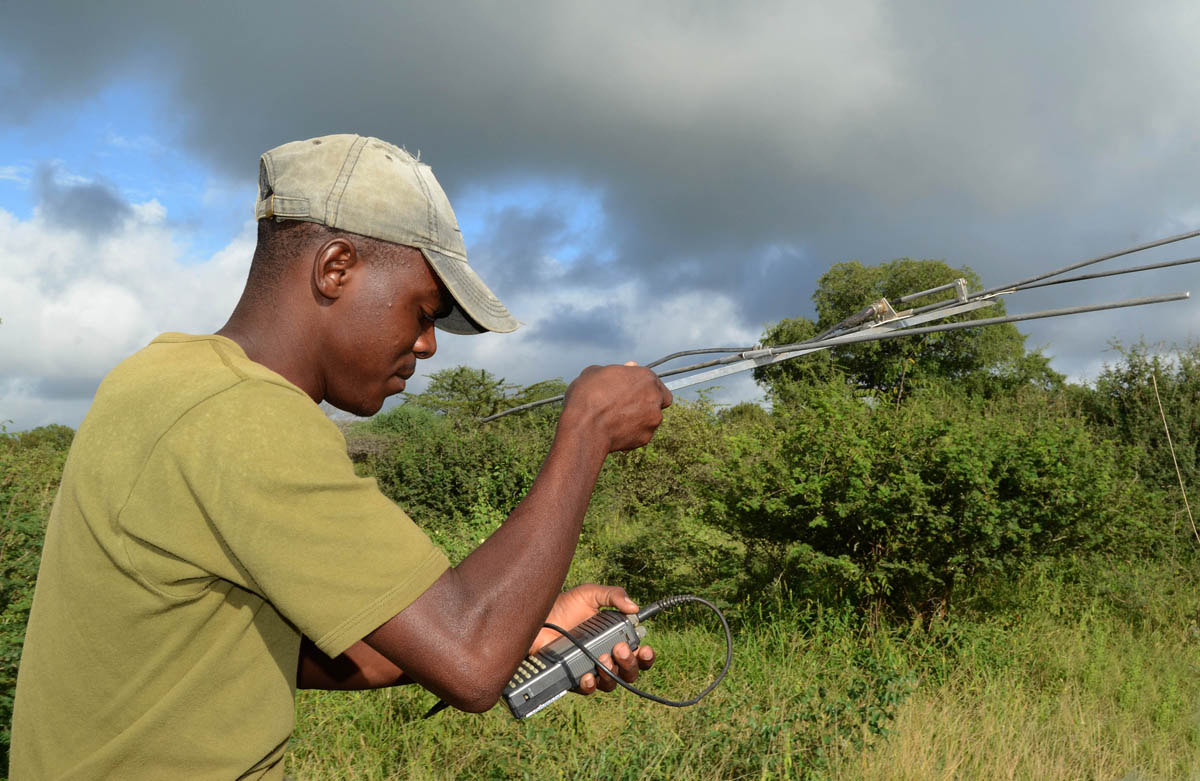 Natasha and the tracking team are responsible for keeping tabs on several hundred black and white rhinos which roam more than a million acres on two private wildlife conservancies in Zimbabwe’s Lowveld region. These rhinos comprise over half of Zimbabwe’s total number of rhinos. Monitoring the status, health and dynamics of these populations is critical to their survival and growth, as well as an integral component of the Internation Rhino Foundation’s Operation: STOP POACHING NOW. 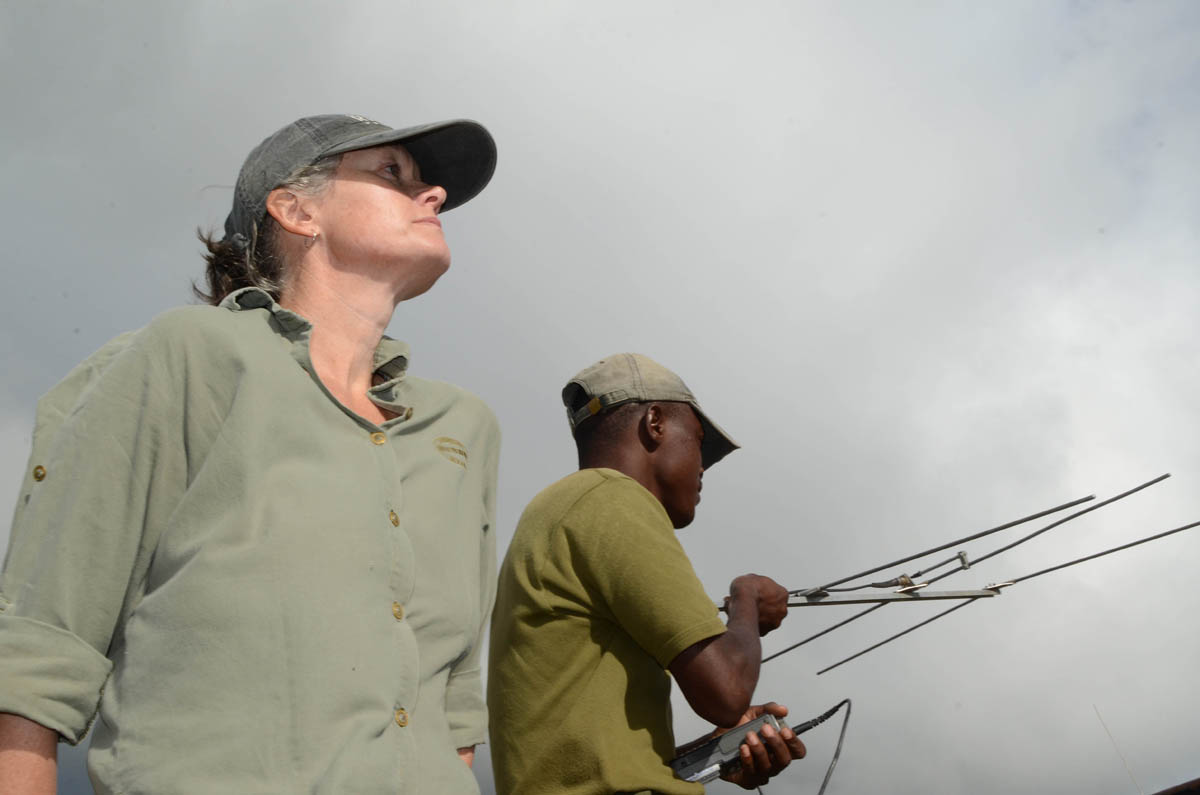 Eventually, the transmitter-carrying rhino comes into view — just barely — about 50 yards away behind vegetation that’s unusually dense for this time of year due to a prolonged rainy season. That adds to the danger. The adult female on which Freedom’s tracking device was homing-in is traveling in the company of several other animals, as expected, and the team snaps photographs of the entire group for identification purposes. However, even the subdued click of the camera shutter at half the length of a football field away is enough to raise the ears of several rhinos. Seeking the source of the sound, the rhinos’ ears rotate back-and-forth the same way the antenna in Freedom’s hand does when he scans the landscape to locate his quarry. Ultimately, the scents and sounds of humans at close range are too much to bear, and a few quick snorts signal the rhinos’ hasty retreat into the bush. 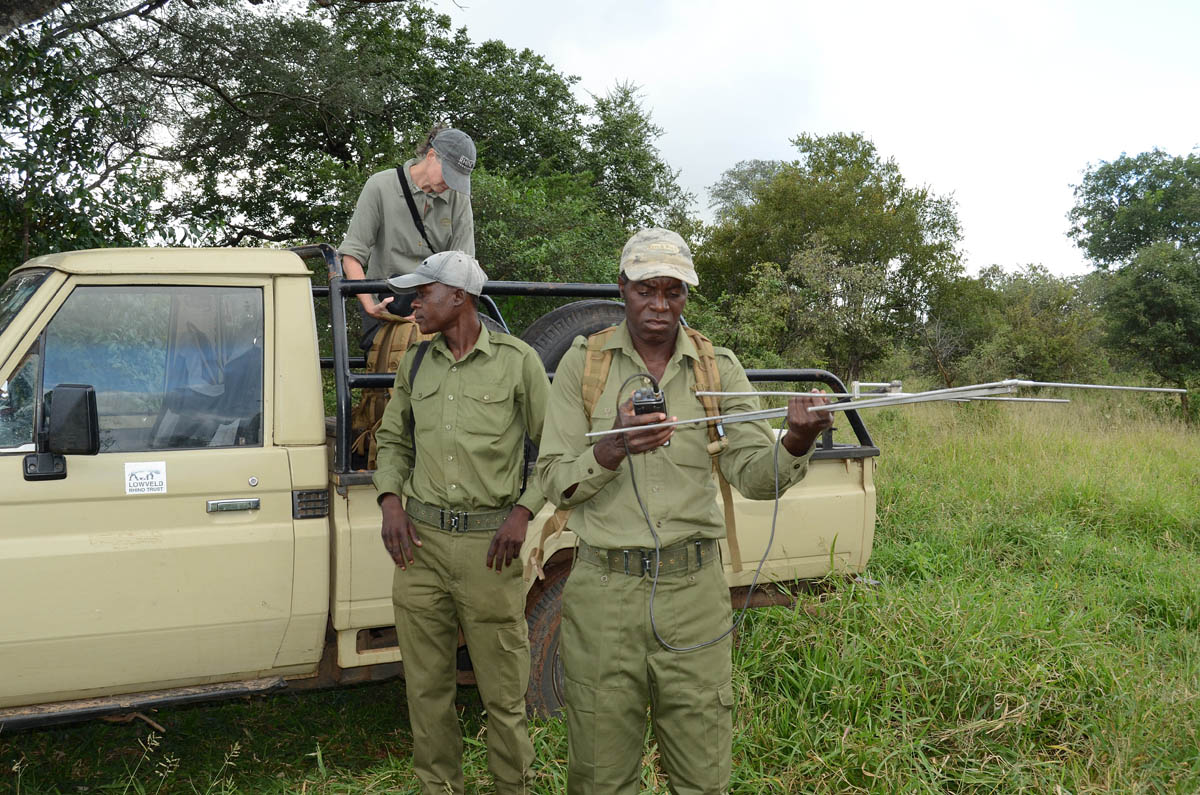 Rhino tracking teams begin work very early in the day, searching for signs that will help them determine the best direction in which to move. In addition to electronic tracking equipment, they carry cameras and data sheets that allow them to identify and record potentially every rhino in the conservancies. That’s essential to managing the population and sustaining an average annual growth rate of 5% or more, which is what experts indicate is necessary to rebuild Zimbabwe’s rhino population. If you don’t know exactly how many rhinos are out there, it’s impossible to determine the level of poaching or its impact on protection efforts. 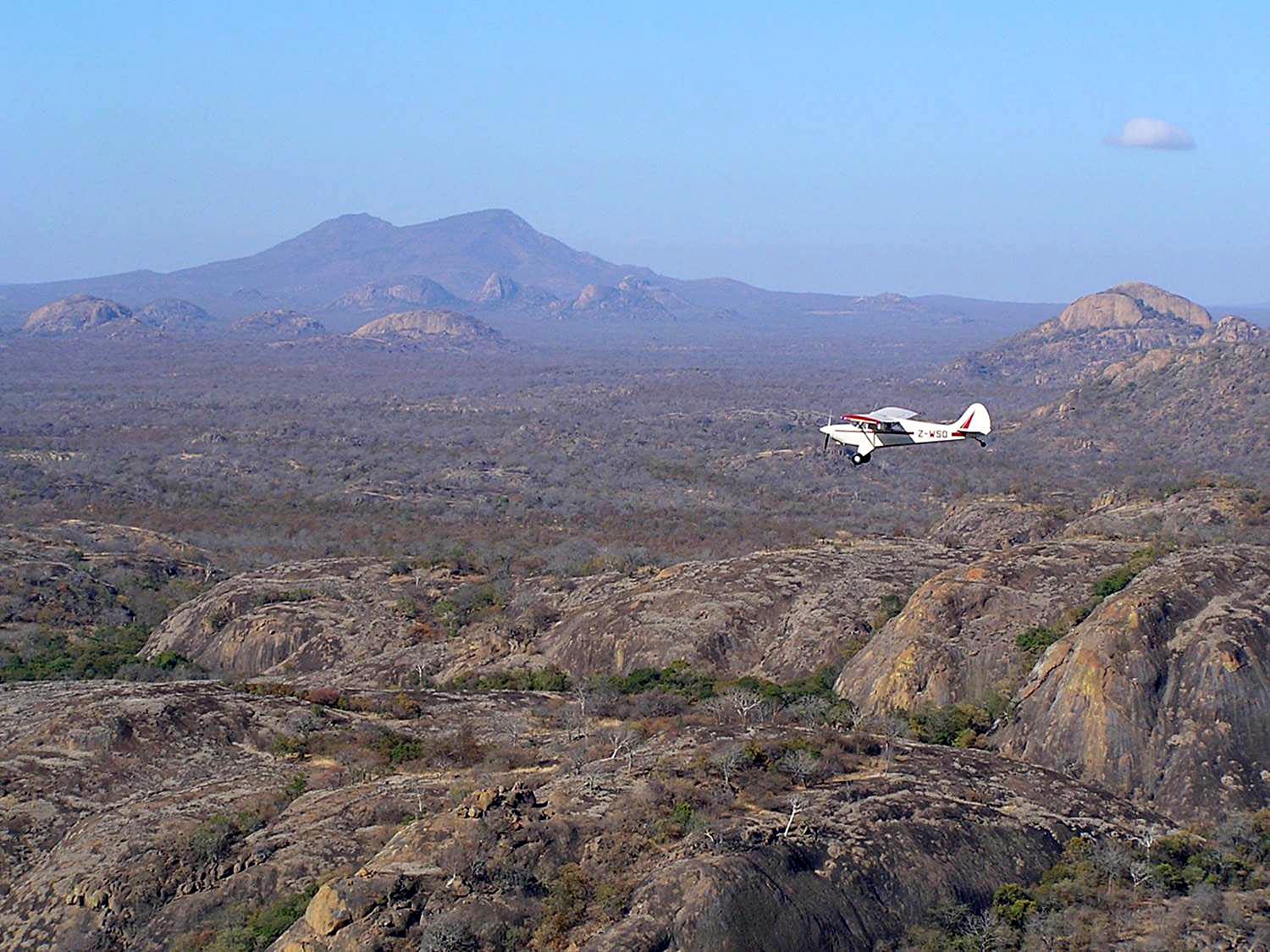 Fortunately, sustained monitoring efforts are working well in Zimbabwe’s Lowveld. Trackers are able to observe and identify nearly every resident rhino during the course of the year, which allows them to maintain a comprehensive database and schedule routine procedures such as ear-notchings, taggings, transmitter implants, de-hornings and veterinary treatments. Some procedures aid in individual identification while others help deter or are undertaken in response to poaching attempts.
Despite the record slaughter of rhinos currently underway in neighboring South Africa, the rhinos of Zimbabwe’s Lowveld have been kept relatively safe. Poaching incidents did increase these last few years, but births continue to outnumber deaths — due both to poaching and natural causes — such that Zimbabwe’s rhino numbers are slowly increasing. Should that trend continue — and it will with intensive monitoring and protection efforts — conservationists believe that the private wildlife conservancies could conceivably hold double the number of rhinos that they do now. Of course, should that prediction prove true, the number of tracking and monitoring teams will have to increase accordingly. 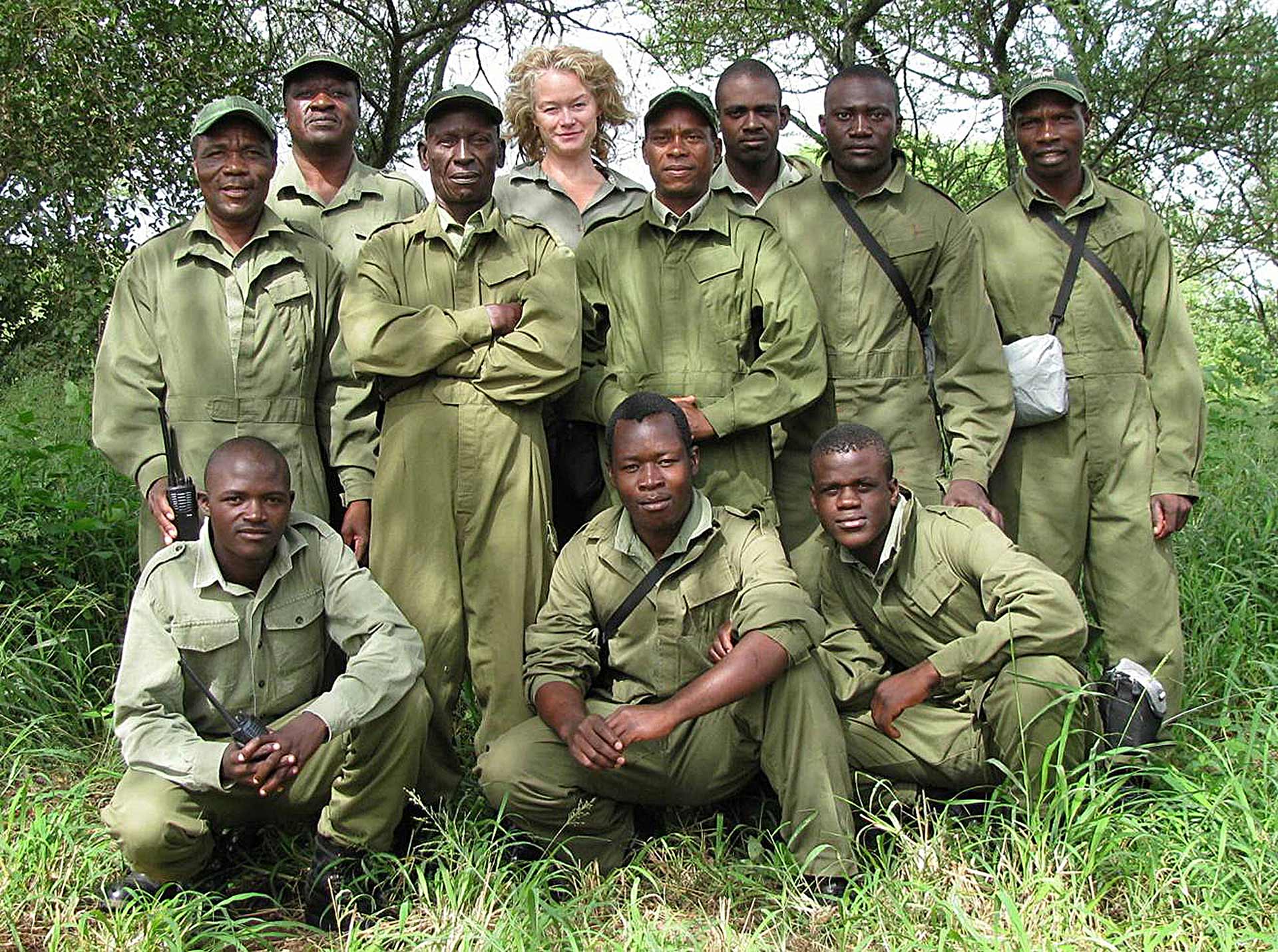 Well-coordinated, information-based wildlife management programs are helping to save Zimbabwe’s rhinos, and these programs serve as models for use in all African rhino range countries. You can help us monitor and track of African rhinos by donating today to Operation: STOP POACHING NOW.
Every gift, large or small, helps. Every gift helps us do more.