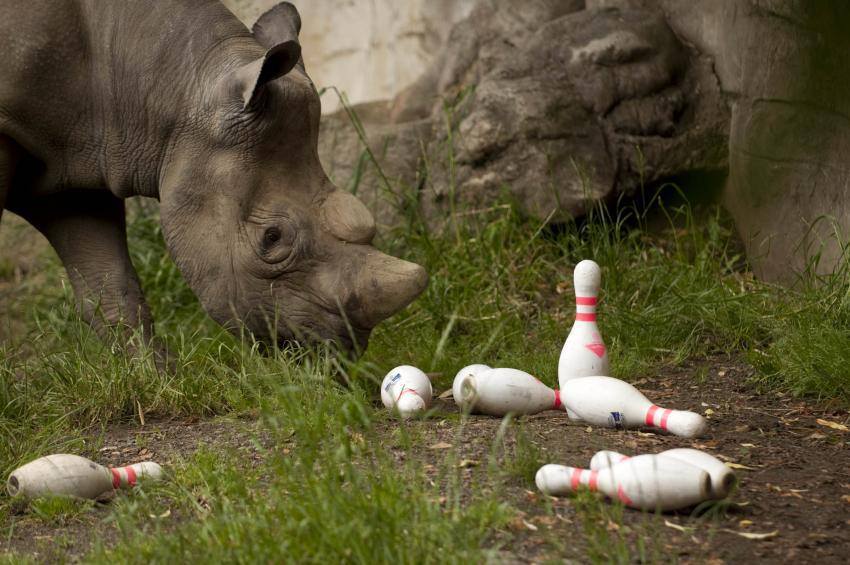 Every year for the last for 30 years, the American Association of Zookeepers (AAZK) has organized a fundraising and awareness initiative for rhino conservation known as ‘Bowling for Rhinos,’ or BFR.

“AAZK realized that the animal keepers of the world were extremely conservation oriented and wanted to help save rhinos and their habitats yet did not have the financial resources themselves to make any significant impact,” said Ed Hansen, CEO/CFO. “That’s when the idea came to start a national bowl-a-thon called Bowling For Rhinos.”

AAZK chapters all across the US & Canada host annual BFR events and to-date have raised over $8 million benefiting rhinos and their habitats throughout Asia and Africa. The support that the International Rhino Foundation has received from AAZK’s BFR program has provided significant funding for the Rhino Protection Unit Program in Indonesia, protecting the Critically Endangered Javan and Sumatran rhinos.

However, on what should have a been a celebratory year as the 30th anniversary of BFR, COVID-19 has put a halt to many of the in-person events that attract large groups of people and raise significant funding. Putting on these events is no easy task during a normal year and is done all on a volunteer-basis. Zookeepers are known for their resilience, so with the added challenge of keeping their supporters safe in the face of the pandemic, AAZK chapters had to get creative this year.

“With an international pandemic, this year continues to be a very challenging year for animal keepers and AAZK, specifically our conservation fundraising, but our members and chapters will never give up. This year we are working on a number of creative and imaginative “virtual” fundraising events and doing our best to not lose momentum for saving critical rhino habitat in 2020 and beyond,” said Ed.

BFR events were never limited to just bowling – individual AAZK chapters hosted variations like comedy nights, carwashes, 5k’s, and wine tasting events known as ‘Winos for Rhinos’ to raise funds.  This year, with many unknowns and large gatherings restricted in most areas, chapters have had to adapt to what best suits their members. There have been online auctions and sales of rhino-printed masks and t-shirts. With the help of technology, trivia nights, happy hours, 5k’s – and even bowling (video game tournaments) – have gone virtual this year. Some chapters have partnered with local restaurants or pubs for awareness, and some have even been able to host socially-distanced outdoor events like mini-golf and picnics.

“Both Javan and Sumatran rhinos are critically endangered and won’t survive without protection and monitoring,” said Nina Fascione, executive director of IRF. “The significant support provided by AAZK and BFR keeps the boots on the ground, keeping rhinos safe.”

“Now is the time for people to step up and join AAZK and its chapters to ensure the dedicated members of the Rhino Protection Units remain in the field protecting rhinos,” said Fascione.

The RPUs in the field don’t give up and neither do keepers. This year, they’re all are working harder than ever for rhino conservation, and we are so appreciative of their commitment. Congratulations to AAZK on 30 years of Bowling for Rhinos and thank you to all the keepers for your hard work, especially this year!

One thought on “How Do You Host a Fundraiser During a Pandemic? Resourceful Zookeepers Are Finding Ways”