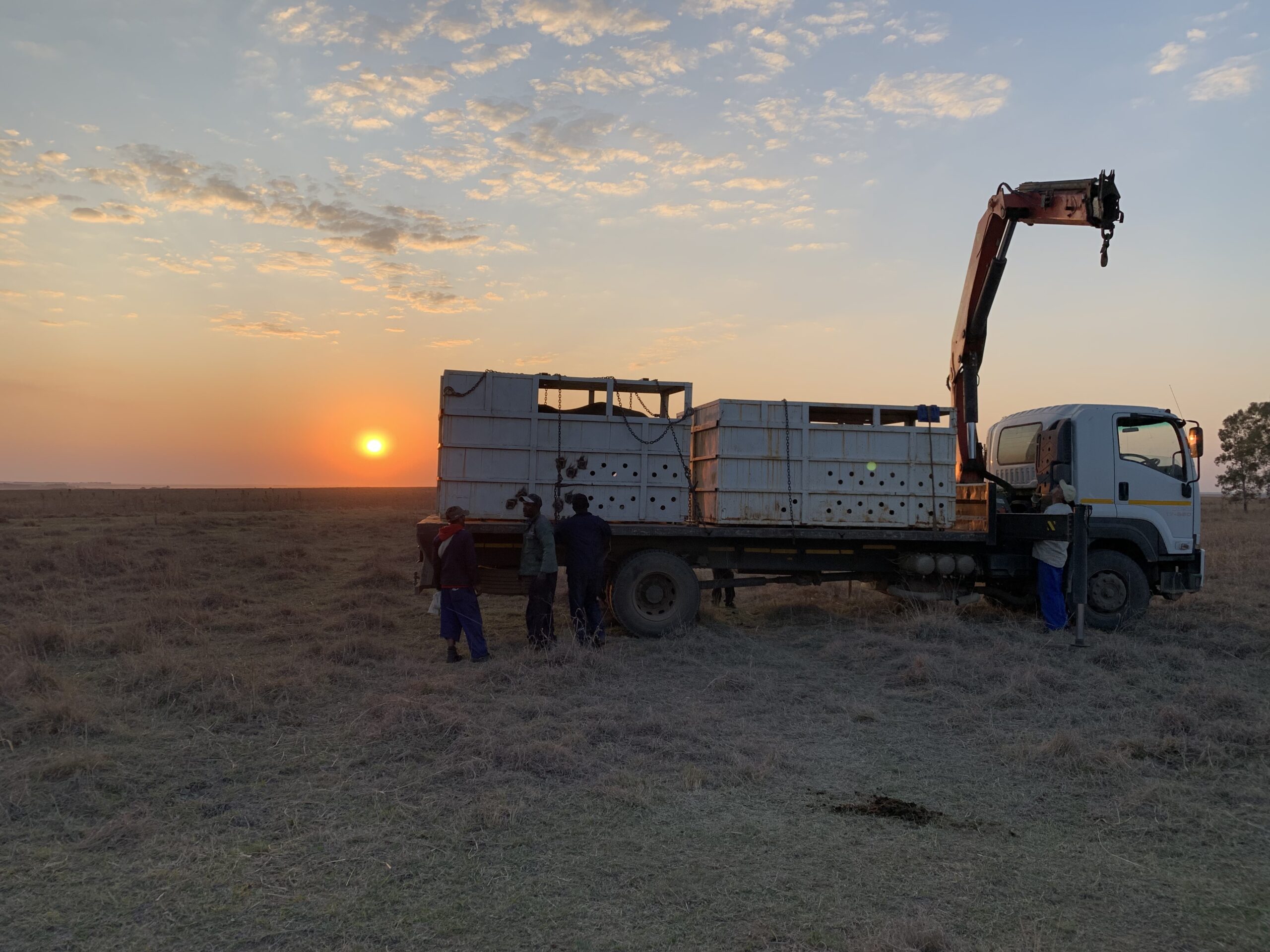 Nothing is quite like analyzing the health and wellbeing of a 5,000 pound white rhino while it is translocated in an enormous crate overnight through the bush. One veterinarian and scientist is doing just that, with support from the International Rhino Foundation (IRF) and donors like you.

Leith Meyer grew up in South Africa and remembers always having a fondness for animals. His love of rhinos started when he was 13 years old after he had the opportunity to go on a bush walk and encounter wild rhinos. Seeing them in the wild while he was on foot, just 30 meters away, was a memory he will never forget and it shaped his life and career. He is now a veterinarian, scientist and professor at the University of Pretoria in South Africa where he studies wildlife, including rhinos.

As a South African, Leith knows all too well the dangers rhinos in his country face. Over the past five years, there have been at least 3,887 recorded rhino poaching incidents in Africa – over 3,200 of these poaching incidents took place in South Africa. White rhinos face the most intense poaching pressure. Their population has decreased by almost 12% in the last four years, from an estimated 18,067 to fewer than 16,000 today.

Moving rhinos into new or former habitats is a key conservation management strategy to ensure population growth and protect them from poaching. These translocations are incredibly complex and resource intensive. Months, if not years, are spent planning a successful translocation and wildlife professionals consider a number of conditions, including the time of year, weather conditions, which animals are suitable to move based on genetic diversity, health and social relationships, equipment and staff needs, and what security and infrastructure mechanisms are in place in the new location, among others.

Our primary consideration before, during and after translocations is the health and wellbeing of the rhinos. This is where Leith and other wildlife professionals come in. With funds from IRF, Leith and his team are studying how to reduce stress and improve the overall physical condition of rhinos throughout the translocation process. Leith’s team monitors energy and hydration levels and overall immune system functioning to get a better understanding of how rhinos cope (or don’t cope) when they are moved from one location to another.

This study is the first of its kind for rhinos and will have a big impact on conservation, providing recommendations about which medications should be given to rhinos during transport and the appropriate amount of fluids to administer during an overnight translocation, all to ensure rhinos are on the best possible footing when released.

“By understanding the potential health issues [rhinos] may have during transport, we can implement treatments before and during a translocation to reduce the risks.”

While this research is primarily focused on white rhinos, Leith says the findings could be generalized to other rhino species. And because the International Rhino Foundation supports essential rhino translocations throughout Africa and Asia, the information we’ve learned from this study can help inform health and welfare standards for rhino translocations globally.

Unfortunately, moving even just one rhino is incredibly expensive – at least $7,000 per animal on average, including medications, staff time and labor, food and water for the animal during transport, and vehicle rental and fuel. And, as the cost of food and fuel has soared in rhino range states, translocations are becoming even more expensive. Today, we are asking for your support to maintain our rhino translocation and rhino research initiatives.

A generous, long-time IRF donor has agreed to match every gift you make, dollar for dollar, from today until December 31st. That means for the rest of this year, your gift will go twice as far and make double the impact for rhinos and the communities living with them. Thank you for your support.

YES I WANT TO DOUBLE MY IMPACT FOR RHINOS