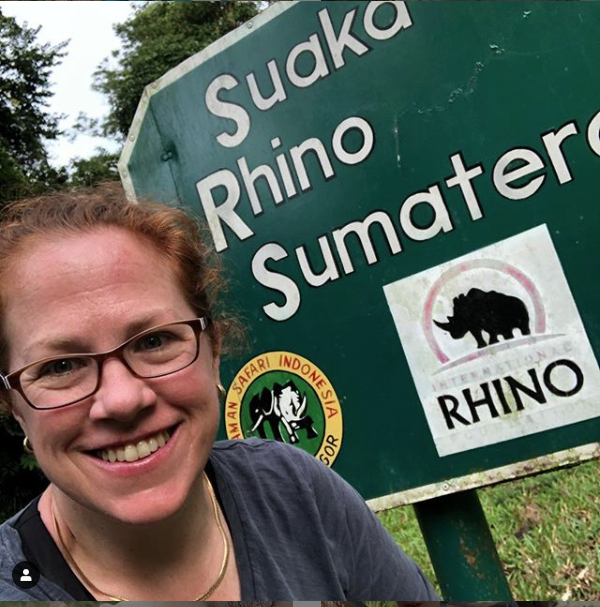 Created in 1996, the facility’s seven resident rhinos – adult males Andalas and Harapan, Andatu (born at the facility in 2012), and females Rosa, Bina, Ratu and her female calf Delilah (also born at the facility May 12th, 2016), reside in large, natural rainforest habitats and receive state-of-the-art veterinary care and nutrition. This tiny population is the core of an intensively managed breeding and research program that is intended to promote the species’ population growth while also generating a genetically diverse “founder” group that could be used as a source for animals to repopulate the National Parks.

IRF Deputy Director, CeCe Sieffert, took our Instagram followers on a tour of the SRS last week. In case you missed it, we wanted to share it again here for you.

3/11 The rhinos at the SRS are under the care of two full-time vets, Dr. Zulfi Arsan and Dr. Made Fera. These dedicated scientists ensure each animal is healthy, and monitor the female rhinos’ reproductive cycles to ensure they’re breeding at the best possible time. Making rhino babies is tricky- they are induced ovulators, which means their cycles aren’t regular like humans’. Regular ultrasounds help the vets know what day is best for breeding, based on the size of the egg developing in the ovary. Once a female is pregnant the vets carefully monitor her for the full 16 months of the pregnancy. It’s a long wait but well worth it! So far two rhino calves have been born at the SRS and we hope to have more in the future! Pictured here is Dr. Zulfi giving Rosa a belly rub, Dr. Fera en route to the rhino enclosure to do a check up, and a selfie with yours truly. #SumatranSunday #TeamRhino #SumatranRhinoRescue #InstagramTakeover #Rhino #WildlifeVet

4/11 The current SRS facility is at capacity, so IRF has funded an expansion project that will double its size. When complete, the SRS will be able to hold 11 animals – and we’re excited to fill those empty spaces with rhino babies! In addition to building 20-hectare enclosures in the forest for each animal, the expansion also includes new dorms for the vets, keepers, and staff, a new office, and a new visitor center. The work is done by hand by workers from local villages, which gives the SRS an opportunity to provide employment for the community and build good will. All work is overseen by Sumadi Hasmaran, the SRS manager. Sumadi built the SRS from the ground-up 23 years ago, and has kept it running smoothly ever since. He’s so talented that he’s earned the nickname “Su-Magic”. Shown here is Sumadi, a worker laying the foundation for the new dorm restrooms, a worker putting finishing touches on the plaster in the new dorm, and the SRS sign in front of the SRS base camp. #SumatranSunday #TeamRhino #SumatranRhinoRescue #InstagramTakeover #Rhino

5/11 Way Kambas National Park is home to more than just the SRS- there are elephants, tigers, tapirs, and more. Part of the park was degraded by encroachment but IRF has funded a rehabilitation program to expand habitat. The park has built a plant nursery, which has produced more than 25,000 rhino food plant seedlings in the first year. Some of these seedlings are even started from collecting and planting the SRS’s rhinos’ poop! While here we met a group of school children from one of Jakarta’s Nature Schools, which are magnet schools that focus on biology and conservation. These fifth graders spent a week at Way Kambas learning about endangered species and habitat protection. On their last day we joined them for a tree planting ceremony at the restoration project. How inspiring to meet the next generation of rhino conservationists! #SumatranSunday #TeamRhino #SumatranRhinoRescue #InstagramTakeover #Rhino #HabitatRestoration

6/11 Rhino Protection Units (RPUs) patrol Way Kambas National Park and the SRS 24/7 to ensure the world’s remaining Sumatran rhinos are safe. Each RPU is a four-man team, which spends a minimum of 14 days in the field each month, walking 70-100 km (40-65 miles) per month! They search for signs of rhino and other species, and look for any illegal activity that’s happened in the park, including poaching, harvesting trees and other protected plant species, and starting forest fires, which can flush wildlife out of a grassy area to making it easy to poach animals. RPUs have the authority to arrest people found engaging in illegal activities within the park, and have been trained in crime scene investigation methods so that criminals are prosecuted correctly. Thanks to 24/7 protection, no known Sumatran rhino poaching has been reported since 2006. Shown here is Muniful Hamid, the Manager of Sumatran Rhino RPUs, an RPU collecting evidence on patrol, RPUs backpack (which weigh more than 20 kg – that’s over 40 lbs!), and Rahman, the Way Kambas RPU Coordinator, communicating with teams while on patrol. #SumatranSunday #TeamRhino #SumatranRhinoRescue #InstagramTakeover #Rhino #WildlifeRanger #RhinoProtectionUnits #ThinGreenLine

8/11 The SRS rhinos spend 22 hours a day in their 10-hectare forest enclosures, so what does staff do the rest of the day and what’s it like to live at the SRS? The staff lives on site, so in many ways it’s like a big family. Meals are shared, and cooked fresh, three times a day. Popular foods include stir fried vegetables, local fish, tofu, tempeh, fried chicken, and of course, rice and noodles! Most staff get around the SRS on bicycles, so most of the noise comes from the resident siamang troops yelling at each other in the treetops. #SumatranSunday #TeamRhino #SumatranRhinoRescue #InstagramTakeover #Rhino #WayKambas #Nature

9/11 Rhinos – known as “badak” in Indonesia – are the focus of all things are the SRS. I wanted to share some of my favorite shots of these critically endangered – and precious – species. Sumatran rhinos are the smallest and harriest of the five rhino species. Like the African species, they have two horns but the horns are much smaller. They eat nearly 200 species of trees and shrubs found in Indonesia’s tropical forests. They are solitary species- only mothers and calves live with one another. They’re not just a species- they’re actually a full genus, making them even more precious and important to protect. With fewer than 80 individuals left on the planet, we’re doing all we can to bring them back from the brink of extinction. #SumatranSunday #TeamRhino #SumatranRhinoRescue #Rhino #Badak #InstagramTakeover

10/11 The natural beauty of Sumatra is stunning. I feel so lucky to work here and work with the people who are protecting this amazing place. If you want to support our work, please visit rhinos.org #SumatranSunday #TeamRhino #SumatranRhinoRescue #InstagramTakeover

11/11 Final takeover post! Thank you all for joining me for a day here at the Sumatran Rhino Sanctuary! I hope you all enjoyed a sneak peak of what goes on here. It’s a pretty incredible place! A HUGE thank you to our amazing on-the-ground partner, YABI, the Rhino Foundation of Indonesia @badak.indonesia as well as the dedicated staff at Way Kambas National Park! Here are a few final photos capturing the magic of Sumatra. Please like/follow the International Rhino Foundation so you can continue to get updates on the SRS and the rhinos. And if you’re inspired, you can even adopt one of the rhinos at the SRS to support their protection and care. Thanks!! – CeCe Sieffert, IRF deputy director #SumatranSunday #TeamRhino #SumatranRhinoRescue #instagramtakeover