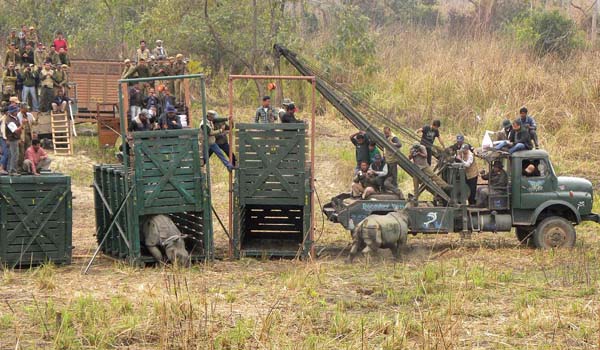 As we ambled along on elephant-back, shrouded in the morning mist, or rattled along bumpy, dusty roads, surrounded by the high grass, it seemed the rhinos would never end – 88…99…110…120!  That’s how many greater one-horned rhinos International Rhino Foundation staff observed over the course of just two days in India’s Kaziranga National Park. This World Heritage Site holds the largest population of greater one-horned rhinos on the planet.  It also has the highest density of tigers, the greatest number of Asiatic wild buffalo, and the world’s last remaining population of eastern swamp deer or barasingha.

More than 2,300 greater one-horned rhinos roam Kaziranga’s wetlands and grasslands, representing nearly 70% of all the wild rhinos left in India and Nepal. Kaziranga’s burgeoning rhino population is also the primary source for restocking other parks and sanctuaries that once harbored this threatened species. Since 2008, under a program called Indian Rhino Vision 2020, IRF and partners have translocated 18 rhinos from Kaziranga and the Pobitora Wildlife Sanctuary to Manas National Park, which lost its original rhino population to poachers during insurgent hostilities in the 1990s. Ten calves have been born since the program began and several rescued orphaned rhinos were also released, but six adult rhinos were also killed by poachers in 2012 and 2013. As a result, 27 rhinos currently call Manas home.  Authorities are committed to halting the recent poaching threat.

The goal of Indian Rhino Vision 2020 is to increase Assam’s rhino population to 3,000 by the year 2020 and, in the process, to return the species to four protected areas where it used to occur. Manas was first on the list. By the end of this year, we will move four rhinos from Kaziranga to help re-establish the species in the nearby Burachapori Wildlife Sanctuary, where they were hunted out approximately 30 years ago. IRF staff visited Burachapori as well this trip, meeting with park leadership and local stakeholders to discuss how we can work together to make the new site a success. As part of the groundwork, habitat and security assessments were carried out early on in the site selection process. But, those were only the first steps towards preparing for the moves.
What’s next?  Working with local communities to build support for the program, including providing education programs for local schools and villages, constructing special rhino holding areas so that the animals can acclimate before they are released, watchtower camps for park guards, patrol roads, and equipping guards so that they can adequately protect their new charges.  We’re on the way to creating this new population.