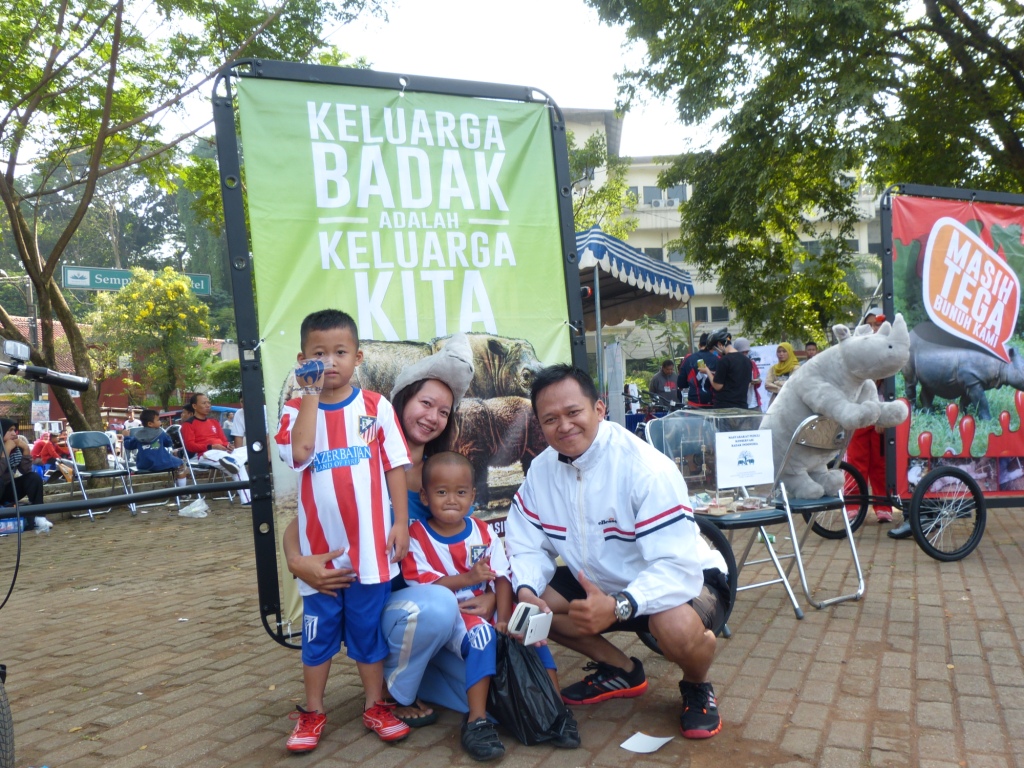 With fewer than 80 remaining, Sumatran rhinos face a real danger of extinction without successful interventions. Under the guidance of the Government of Indonesia’s emergency action plan, an alliance of international conservation organizations, including IRF, has launched Sumatran Rhino Rescue, a phased, multi-year undertaking to save the Sumatran rhino. We plan to consolidate reproductively viable animals from the widely dispersed, fragmented wild populations into managed breeding facilities, like the Sumatran Rhino Sanctuary. Rhinos will be bred in captivity and, once limiting factors are under control, will eventually be reintroduced into protected areas in the wild.

Step 1 of this series talked about conducting surveys so we can determine the locations of isolated rhinos, developing plans for, and then implementing captures using pit traps.

Step 2 covers the logistics of translocations– why rhinos are moved, how their new homes are chosen, and how translocations will help save the Sumatran rhino.

Step 3 looks back at the successes in Sumatran rhino captive breeding and how what we have learned can help rebuild the population and save this species from extinction.

Here in Step 4, we talk about REINTRODUCTION – what needs to happen before rhinos can be returned to the wild, and the protection that will be maintained throughout this 4-step process and beyond.

SUMATRAN RHINO RESCUE: REINTRODUCTION TO THE WILD
By consolidating the widely dispersed, fragmented wild populations into managed breeding facilities like the Sumatran Rhino Sanctuary, the end goal of our project is to increase the total population enough to be able to return rhinos to protected areas in the wild. However, this process will not happen quickly. With a gestation of around 16 months, a female Sumatran rhino gives birth only every 3 to 4 years – meaning that even in perfect conditions, it will take a long time – maybe even decades – to rebuild this population to a sustainable level.

That doesn’t necessarily mean it will be decades before we can start returning Sumatran rhinos to the wild, but this species will be dependent on human intervention (like captive management and anti-poaching patrols) for a very long time. The specifics of exactly when and how many rhinos will be returned to the wild will be dependent on the success of the breeding program, continued protection programs, and habitat restoration projects. Therelease of rhinos will mostly likely happen slowly over a period of years, and the captive breeding program will continue at least until we have sufficient evidence that the wild populations are growing and thriving.

We do know where the rhinos will most likely be returned to – the two remaining population strongholds and this species’ best chance for success are in Way Kambas National Park (in South Sumatra) and the Gunung Leuser Ecosystem (in North Sumatra). Of the 10 isolated subpopulations of Sumatran rhino, the Way Kambas and Leuser populations are the only two that are thought to have more than 15 individuals and are thus considered to be reproductively viable. It’s important to note that throughout this process, protection for the rhinos remaining in the wild will never stop – it is critical that we preserve these populations and their natural habitat while their numbers are being increased in the captive-breeding program. Rhino protection programs in both Way Kambas and Leuser are being fortified by maintaining and increasing anti-poaching patrols as well as undertaking habitat restoration projects, which return previously altered lands back into suitable habitat for rhinos.

IRF’s partner in South Sumatra, Yayasan Badak Indonesia (YABI) currently operates nine Rhino Protection Units (RPUs) in Way Kambas. That’s nine teams of four rangers that each spend about 15 days at a time on patrol, rotating coverage so that the park is patrolled 24 hours a day, 365 days a year. The main goal of the RPUs is proactive poaching prevention – their presence is a deterrent to poachers and has greatly decreased poaching incidents since they began patrolling 19 years ago. They also remove and document snares and collect evidence of any illegal activities in the park. In the event they encounter a poacher directly, each unit has one member who is a government park ranger who has the authority to carry a firearm and make arrests. While on patrol, RPUs also record data on rhino signs they discover like footprints, wallows, and feeding areas – and sometimes even direct rhino sightings! Last year, the Way Kambas RPUs covered 13,239 km on patrol. They recorded 18 rhino footprints, 35 rhino wallows, 21 rhino dung piles, and 16 rhino feeding sites.

In Way Kambas, around 30% of the rhinos’ rainforest habitat has already been lost to human encroachment – land that was illegally cleared for farming remains degraded and unsuitable for rhinos and other species, like tigers and elephants. Last year, Way Kambas National Park and the International Rhino Foundation began to restore degraded habitat and reforest it with rhino and elephant food plants. We have already replanted more than 60 acres of land directly adjacent to the prime rhino/tiger/elephant habitat within the park. Over the next two years, we will maintain this restoration area in Way Kambas National Park and replant an additional 60+ acres with rhino food plants. We anticipate that within 4-5 years, the reforested habitat will be mature enough for rhinos to move in. The long-term outcome will be an expanded habitat which allows the population of Sumatran rhino to grow and thrive, making Way Kambas an ideal location for returning rhinos to the wild.

The Leuser Ecosystem in Aceh, North Sumatra, is home to the largest remaining population of Sumatran rhinos in the world, and is the last place on earth where Sumatran rhino, orangutan, elephant and tiger co-exist in the wild. IRF’s local implementing partner Forum Konservasi Leuser (FKL), or Leuser Conservation Forum, operates Wildlife Protection Teams (WPTs) that function similarly to the RPUs in Way Kambas. There are 25 five-man WPTs that patrol key areas of the Leuser ecosystem monitoring rhinos and other wildlife, removing traps and snares, and apprehending poachers. In 2018, WPTs successfully arrested 5 tiger poachers, destroyed 37 illegal camps, and found 347 cases of illegal logging on patrol in Leuser – there were zero rhino poaching cases discovered. FKL found 758 signs of Sumatran rhino presence last year, and from this data, believes that the population of rhinos in Western Leuser has grown.

The biggest threats to the Leuser ecosystem are human encroachment, illegal logging, and illegal burning of forests to clear for palm oil plantations. Despite this, FKL has made significant progress in protecting the almost 1.5 million acres of Sumatran rhino habitat in Western Leuser. Camera trap data indicates that Sumatran rhinos are now even returning to an ex-logging concession area after being absent for more than 20 years. FKL, Gunung Leuser National Park (GLNP) and Aceh Tenggara District Government are currently restoring an additional 4,400 acres of rhino habitat area which was previously encroached inside GLNP. The restoration effort is conducted collaboratively with local communities and is expected to further increase the carrying capacity of Sumatran rhinos that the Leuser ecosystem can hold in the future.

As the amount of suitable habitat for rhinos grows in Way Kambas and Leuser, hopefully so will their populations. However, this will also increase the need for intensified protection from poachers, so the RPU and WPT programs will also grow accordingly.

Carrying out this plan won’t be quick and it won’t be easy – but Sumatran rhinos are depending on us and this is their best chance. Under the direction of the Government of Indonesia and with support from conservation organizations all over the world and dedicated implementing partners, we can succeed. We CAN save the Sumatran rhino.

This is an audacious plan that requires a lot of time, work, and resources, but we think it’s worth it. IRF has already been involved with Sumatran rhino care and conservation for more than 25 years, and we have made a long-term commitment to ensure this species’ survival. If you’d like to be a part of saving the Sumatran rhino from extinction, please consider making a tax-deductible donation here and help us save this magnificent species…while we still can.

2 thoughts on “The Plan to Save Sumatran Rhinos: Step 4- Returning Rhinos to the Wild”