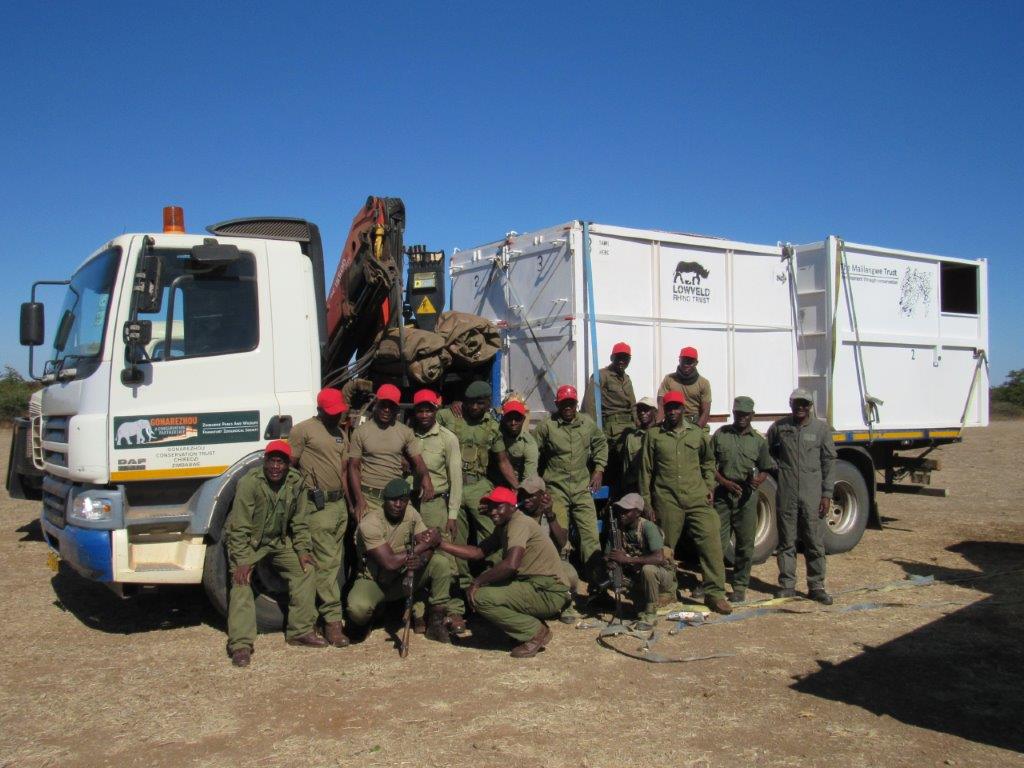 After nearly 30 years of absence, Critically Endangered black rhinos are being reintroduced to Gonarezhou National Park by the Gonarezhou Conservation Trust’s team of experts and partners. In July, the International Rhino Foundation’s partner in Zimbabwe, the Lowveld Rhino Trust (LRT), participated in a translocation to establish the initial population in Gonarezhou. Natasha Anderson, IRF’s Zimbabwe Program Coordinator, provides a first hand account of the operation. All photos courtesy of LRT.

Headlights sweep around the last corner to light up the solid poles of the boma walls. Weary people maneuver the metal crate into position to offload the massive drugged animal. The truck engine is cut, the antidote to the heavy sedative is administered, a minute of silence, then another, then a deep drawing of breath. A breath that sucks in awareness of a new landscape – new plants to eat, some new neighbours to know. One thousand kilograms of Critically Endangered black rhinoceros steps cautiously into new territory.

After an absence of nearly thirty years, black rhinos are back in Gonarezhou National Park, Zimbabwe – a historic achievement after decades of preparatory work by the Gonarezhou Conservation Trust (GCT) and its partners. It has been a long road to get to this new beginning. Re-establishing a black rhino population in this 5,000 km sq park, with the potential to expand significantly, is a big step in the multi-phase process to save this magnificent species from extinction.

Three decades ago Zimbabwe, home to the largest remaining black rhino population in the world, faced a wave of rhino poaching that had already decimated formerly large populations to the north. In the 1970s, an estimated 65,000 black rhinos survived in Africa. By 1992, those numbers were down to only 2,500 individuals.

It was 1992 when “Siabuwa”, a young black rhino cow, took her cautious first steps into new territory. A vague report of a rhino sighting in the Siabuwa communal lands in the Zambezi Valley had been passed on to a small team working to build new rhino populations in Zimbabwe’s Lowveld region, away from the cross-border poaching. Siabuwa’s skills in avoiding humans were so well honed it took two weeks of searching to find and catch her. Then it was a 27 hour drive to her new home in Bubiana Conservancy where she joined a growing group of rhino refugees that were being gathered together from the fragments that remained of what just five years earlier had been a national population numbering over 1,000.

The Bubiana Conservancy proved excellent habitat and in less than ten years, the population had grown to over 100 black rhinos. Then, in the early 2000s, Zimbabwe’s Fast Track Land Reform Policy began and the thick bushveld of Bubiana Conservancy was cut down for new crop land.

Rhino poaching started to flare up after a decade of quiet. Again, the black rhinos were left vulnerable and in need of a new sanctuary. That refuge was found in the Bubye Valley Conservancy (BVC), where the Lowveld Rhino Trust, IRF’s on-the-ground partner, began moving vulnerable rhinos as a new phase in the process of consolidating rhinos into the most secure areas. This was a slow process, taking several years owing to funding constraints and delays in approvals.

Siabuwa was one of the survivors of the poaching onslaught that engulfed Bubiana, although she had been badly wounded by a bullet. Again, on stepping into the holding bomas in BVC, she drew in a deep breath, gathering information on her new surroundings – only this time it was different in a significant way.

On top of the smells of new trees and new rhinos, because by this time BVC was already home to over 100 black rhinos, Siabuwa could smell a familiar scent. In the neighbouring pen was a young female who had lived next to Siabuwa in Bubiana. In Bubye, these two settled into neighbouring home ranges. They chose these home ranges adjacent to other familiar ex-Bubiana black rhinos that had been moved into BVC in previous years. The long-term social cohesion of this species made it possible for the rhinos to re-create their neighborhoods in their new refuge, so they settled in more readily than complete strangers would have.

In Gonarezhou, Siabuwa’s daughter, Siashialaba, has just breathed in the smells of her new neighbourhood. She had been loaded in BVC in mid-2021 onto the same truck that had moved Siabuwa to Bubiana 29 years before, still kept functional by the Lowveld Rhino Trust. She smelt new plants she has never encountered before, some new rhinos she does not know, and one she does. In the next pen is Chain, her close neighbour in Bubye Valley Conservancy. Siabuwa’s grandchildren will be born in Gonarezhou – about as far down the road as it is possible to get to from where Siabuwa was born while still being within Zimbabwe.

In all, 29 rhinos were translocated from BVC, Malilangwe and Save Valley to establish the new population in Gonarezhou. Monitors report that all of the rhinos are doing well and adjusting to their new home.

The Gonarezhou Conservation Trust (GCT) is an innovative conservation partnership between the Zimbabwe Parks and Wildlife Management Authority and the Frankfurt Zoological Society that is responsible for the management of Gonarezhou National Park. IRF supported a feasibility study to assist in planning for this reintroduction and provided funding to support the translocations through the Lowveld Rhino Trust.

IRF would like to congratulate the GCT and its partners for their hard work and perseverance on this historic occasion.