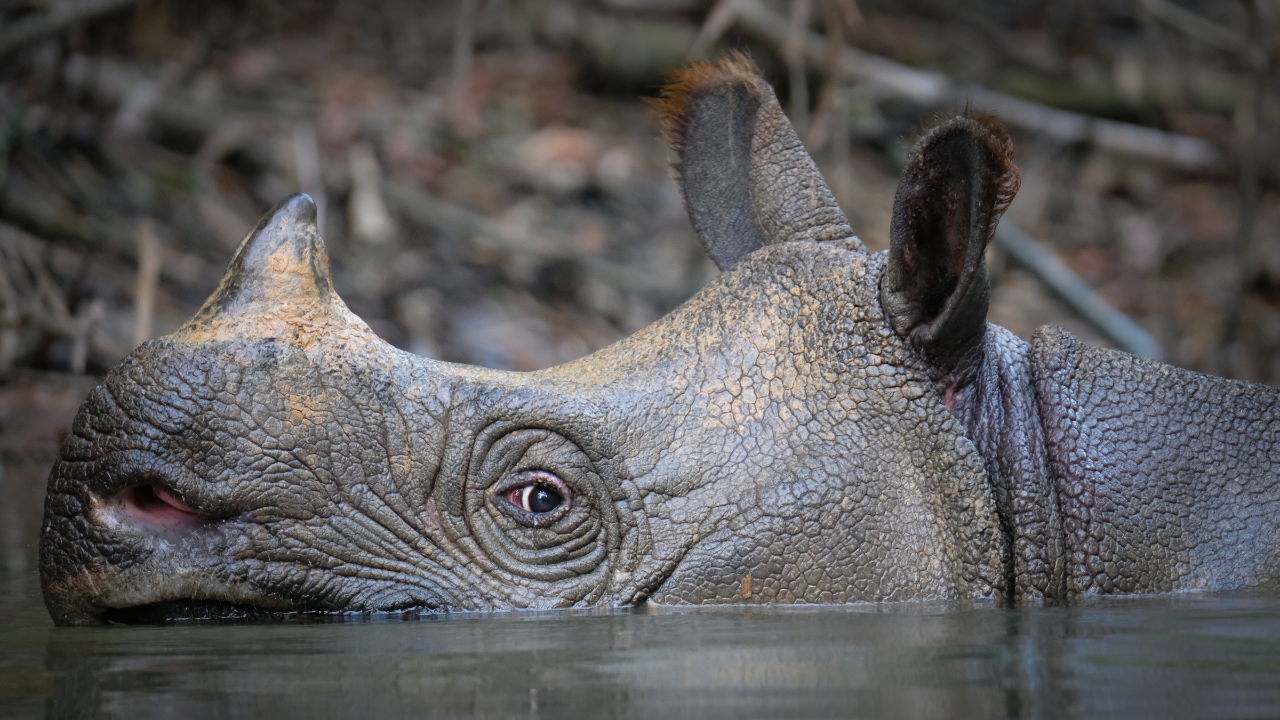 IRF is often asked how long one would need to spend in Ujung Kulon National Park (UKNP) to see a Javan rhino. The answer is that it could take a lifetime. Javan rhinos are shy and tend to hide from people in the dense rainforest that is UKNP. Even members of the Rhino Protection Units (RPU) that patrol the park on a daily basis rarely see the rhino even though they document various signs of their presence.

Because it is so uncommon, spotting a Javan rhino is a special experience and one not soon forgotten. Inov, IRF’s Indonesia Program Manager, fondly remembers his chance meeting with the Critically Endangered rhino.

Inov and Bibhab Talukdar, IRF’s senior advisor for Asian rhinos, were hiking with an RPU team – a great experience on its own. They had stopped for the evening at an RPU camp and were cleaning up after a hot and humid trek through the jungle. The camp was near one of the rivers that criss-cross the park.

The RPU team asked Inov and Bibhab if they would like to look for rhinos on the river. Javan rhinos love the water and most often are spotted in or near the rivers. There was one challenge – they did not have a boat at the time. This fact, however, did not stop the RPUs.

A makeshift canoe was fastened from available buoyant materials, and paddles were cut from fallen branches. Amazingly, and to the credit of the RPU’s knowledge and innovation, the makeshift craft was watertight and took to the river without any flaws.

The river cruise had lasted about an hour and the daylight was beginning to fade. Darkness falls quickly in the jungle. Inov was just suggesting that they turn and head back to the safety of camp. Just then, Bibhab spotted something rustling in the leaves along the river bank.

And, there it was – a Javan rhino! Bibhab was able to alert all of the members of the boat and everyone was able to share the moment before the rhino disappeared into the dense forest. “I had no expectations, and that is important for anyone hoping to see a Javan rhino,” said Inov. “It increased the joy of actually seeing one.”

Since it is difficult to see Javan rhinos, the best way to see them is by using cameras positioned around the park. Park officials can identify each individual rhino from the camera images and document the sightings and relevant data. IRF, with your help, supports the Javan rhino monitoring program with equipment purchases and other needs.

Javan rhino photos are courtesy of the Indonesian Ministry of Environment and Forestry.