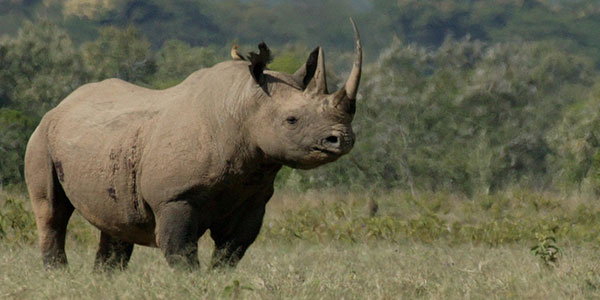 Whether a rhino lives on the African Serengeti, in the foothills of the Himalayas, or in the dense tropical forests of Java and Sumatra, it inhabits what wildlife ecologists refer to as a home range.  This is the area in which it must find all the food, water, and shelter necessary to survive, as well as locate members of the opposite sex in order to reproduce.  Sometimes the home range of one individual will overlap with those of others.  In other cases, one rhino will defend part or all of its home range from intrusion by other species or members of its own kind.  Biologists refer to this defended area as a territory.

The size of a rhino’s home range varies from species to species, from one habitat type to another, from one season to the next, and even between the two sexes.  Field research results also can be mixed depending upon the study methods used and the way in which the home ranges are actually mapped.  However, it appears that the rhino species with the most compact home range may be the greater one-horned or Indian rhino, which prefers wetland habitats in river valleys.  Studies conducted in Nepal’s Royal Chitwan National Park indicate that the average annual home range of a female is slightly less than four square kilometers (about 1,000 acres) and that of a male slightly more.  Studies also show that Indian rhino ranges expand during periods of drought, when animals have to travel further to find food, and shrink during the monsoon season, when increased rains produce lusher, denser vegetation.

Larger home ranges are more common among the two savanna-dwelling African species – the black rhino and the white rhino – and the two tropical forest-dwelling Asian species – the Sumatran rhino and Javan rhino.  Home ranges of female Sumatran and Javan rhinos usually don’t overlap and may cover between eight to 15 square kilometers.  Male home ranges of these same two species tend to be significantly larger, perhaps 15 to 50 square kilometers, and are much more likely to overlap.  Some of the largest home ranges measured are those of black rhinos inhabiting the vast Serengeti.  In fact, it’s not unusual for an individual to roam an area of more than 100 square kilometers. The abundance of waterholes, wallows and salt-licks factors into home range size as much as food availability.

Rhinos typically mark their territories with urine and dung, as well as by scraping the soil with their hooves and rubbing trees with their horns.  Some concentrate their dung in piles called middens, which serve as natural “street signs,” while others kick it into the air to better disseminate their unique scent and advertise their presence.  Given a rhino’s notoriously poor eyesight, the use of olfactory cues helps avoid aggressive encounters.