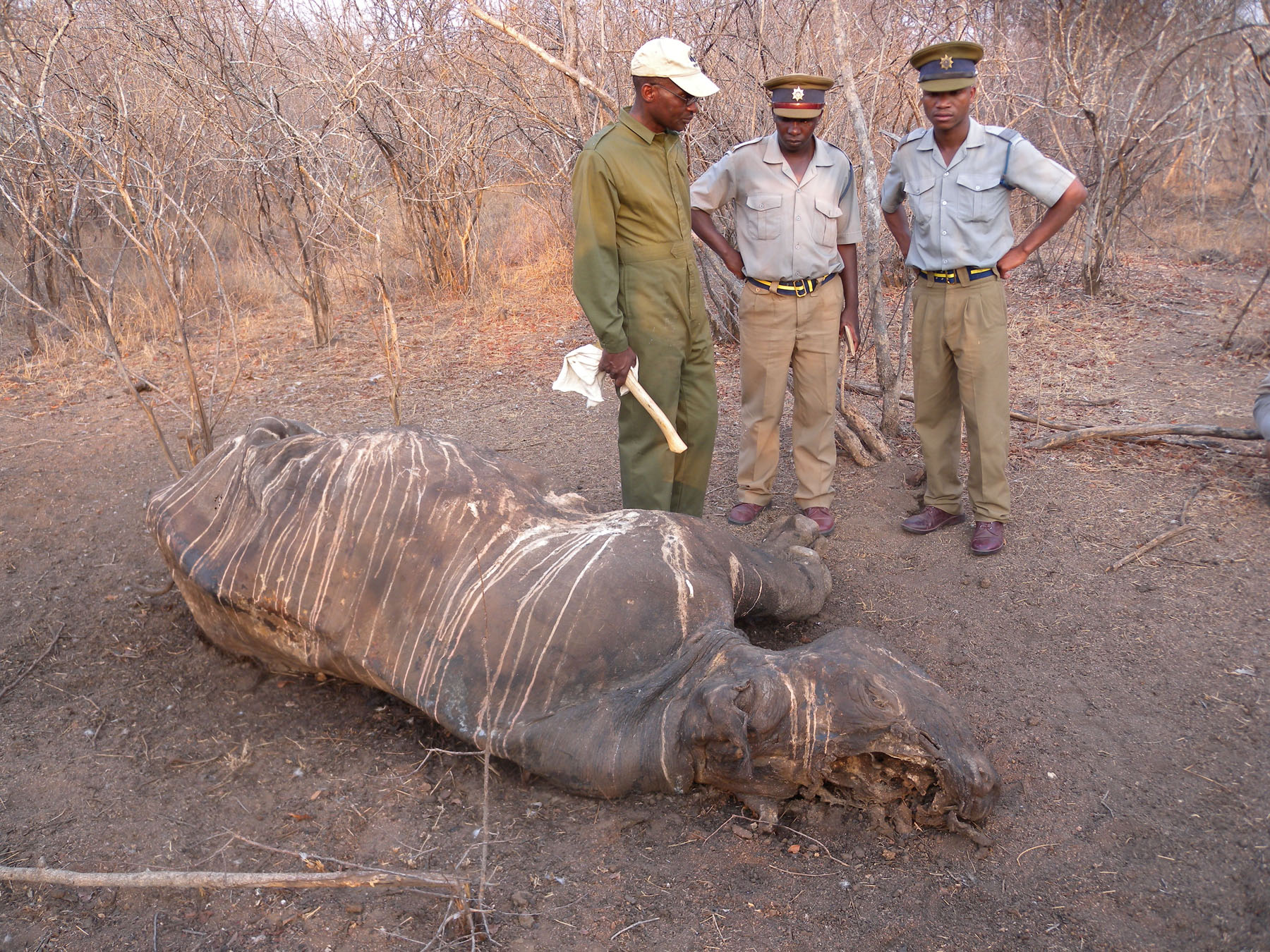 The front line in the war on poaching can be a dangerous and deadly place.  Rhino rangers risk their lives in the pursuit of criminals, using all the skill, determination and courage they can muster.  They are not, of course, always successful in apprehending poachers, but when they are and when cases come to court, it’s devastating when those convicted walk away with a nominal fine or minimal sentence and are back in business in no time at all.  That’s why training in collecting evidence at the scene of a crime, which will hold up in court, is so essential.
Crackdowns in law enforcement are critical to the success of the International Rhino Foundation’s Operation: STOP POACHING NOW!

In Zimbabwe, the Lowveld Rhino Trust, has worked to increase effectiveness within the judicial system. Special workshops have been held for court officials, police and investigators, including visits to a real rhino crime scene (two rhinos killed), thereby gaining firsthand experience of the brutality of rhino poaching, on what evidence is critical to support court cases, how difficult the evidence collecting process is, how important the chain of custody is in preserving the integrity of evidence, and how such evidence can be effectively presented in a court of law. The workshops have improved the officials’ knowledge of the laws relevant to rhino crimes and their awareness of the seriousness of the current problem.
Lowveld Rhino Trust staff routinely assists local authorities in prosecuting wildlife crime, bringing civil actions against suspects who were previously acquitted in criminal courts, and helping to ensure that fines are paid and tougher sentences are more commonplace. Thanks to ongoing lobbying efforts, conviction rates rose from a mere 4% to 26% and the penalty in Zimbabwe for those convicted of rhino killing or the unlawful possession of rhino horn is now a minimum of 9 years imprisonment for first-time offenders. Some rhino poachers have been sentenced for up to 21 years in prison. Collaboration with counterparts in South Africa and Botswana also need to be strengthened, which will help authorities track fugitive criminals or recover smuggled horn and illegal weapons.

Authorities from rhino range countries also can take a cue from the Kingdom of Swaziland.  Poachers convicted for killing any protected species, including rhinos, will serve a minimum sentence of 5 years and perhaps as many as 15.  They are not allowed simply to pay a fine, but must compensate the owner of the animal that was killed, otherwise an additional 2 years is added to their sentence.  In addition, Swaziland’s rangers know that justified actions taken against poachers will be defended in court should the rangers have to use deadly force, which certainly helps strengthen their resolve.  This is in stark contrast to South Africa, where rangers using deadly force are often charged and held for murder.

The successful prosecution of wildlife crime across international borders is becoming increasingly important.  In the United States, for example, Operation Crash, led by the US Fish and Wildlife Service, pursues those involved in the black market rhino horn trade and prosecutes criminals for a wide variety of offenses including  conspiracy, smuggling, money laundering, tax evasion and bribery.  Perhaps more importantly, wildlife officials are now partnering with crime experts to incorporate standard criminology techniques as they pursue the complicated and deadly networks perpetrating wildlife trafficking and other international crimes.
You can help ensure that the tide continues to turn in terms of wildlife law enforcement by supporting Operation: STOP POACHING NOW.
Every gift, no matter how large or small, helps. Every gift allows us do more.