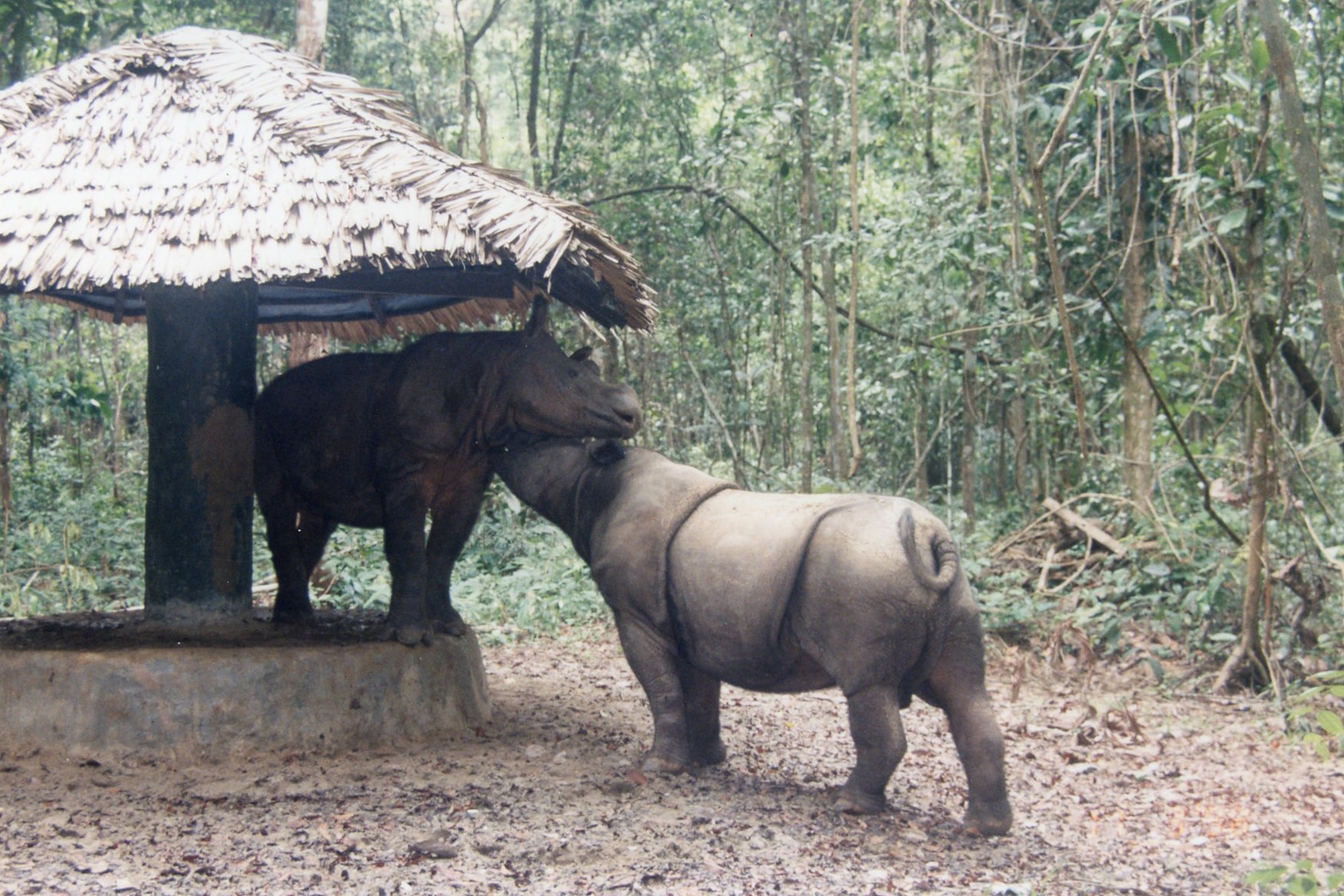 With a new calf born at the Sumatran Rhino Sanctuary (SRS) just three months ago, the International Rhino Foundation (IRF) is celebrating many things at the sanctuary in Way Kambas National Park, including rhinos, people and partners.

The construction of the SRS in 1996 was a remarkable accomplishment, requiring hard work, ingenuity, and perseverance. Many of the individuals who had the vision of creating this sanctuary to help ensure a future for Sumatran rhinos are still involved in rhino conservation today. The Way Kambas SRS now serves as a center of excellence and a model for additional sanctuaries in Indonesia and around the world, including one currently under construction in the Aceh province in northern Sumatra. The new sanctuary is part of the Indonesia Ministry of Environment and Forestry’s Emergency Action Plan for Sumatran rhinos.

Although the SRS opened in 1996, the story actually begins in the early 1980s. Eighteen Sumatran rhinos had wandered close to an industrial facility and the Government of Indonesia asked Dr. Jansen Manansang of Taman Safari Indonesia (TSI), a world-class animal theme park in Bogor and two other locations, to help capture them and bring them to a safer place. There was precious little knowledge about Sumatran rhinos at the time. However, Jansen and a large team had already successfully rescued Sumatran elephants and moved them to what would become a protected center in Way Kambas. “I said I will give it a try,” Jansen, one of the many individuals who still works to help Sumatran rhinos, told us recently.

The first rhinos captured in Indonesia (read more about the first captures on the IRF blog) were part of a Memorandum of Understanding signed with Port Howlett Zoo in the United Kingdom. In total 8 animals (4 males, 4 females) were captured under this program, divided among Port Howlett and three facilities in Indonesia.

American zoos joined with TSI and others to rehome additional Sumatran rhinos under an agreement with the Indonesian Government starting in 1988. A total of 10 rhinos (3 males, 7 females) were captured, of which 7 were exported to the United States to be housed at zoos in Los Angeles, New York, San Diego and Cincinnati. Thanks to expertise by IRF Board member Terri Roth and others, there were three Sumatran rhino births in Cincinnati in 2001, 2004 and 2007.

The rhino captures were not without challenges, many of which could not have been foreseen. For example, the behavior and diet of Sumatran rhinos differs from other rhino species more commonly kept in captivity. The lessons learned from these initial conservation efforts, and the desire to help the wild population, led Jansen to work with those zoo partners to return the rhinos to Sumatra, but the question was where. Jansen traveled with Dr. Tom Foose, IRF’s first program director, to Africa to visit sanctuaries there and see what could be done in Indonesia. This was the start of a long and lasting relationship with IRF.

Taman Safari Indonesia and IRF settled on some former logging land in Way Kambas National Park. Jansen acquired 10 acres – 9 would be used for the sanctuary with the last reserved for a planned eco-tourism companion area. TSI would later gift this land, refusing reimbursement from IRF. Eco-tourism and projects for the local communities are currently in the works by the SRS and Way Kambas National Park.

TSI also contributed a critical employee, Sumadi Hasmaran, to the SRS. Sumadi worked tirelessly to build the SRS. He continues to manage the facility today and has supervised all the expansion activities over the years. IRF has nicknamed him “SuMagic” because of his resourcefulness.

Despite the more than twenty-five years that the SRS operated, Taman Safari Indonesia remains deeply involved in providing financial and material support to its conservation projects. Dr. Bongot of TSI’s veterinarian team recently assisted the staff of the SRS during Rosa’s birth of the new calf and consults with the team.

IRF would like to thank Taman Safari Indonesia for their actions on behalf of Sumatran rhinos and their long-standing support of the SRS.