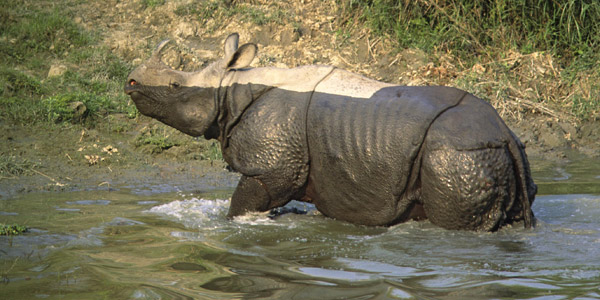 The expansion of the IRF-funded Sumatran Rhino Sanctuary (SRS) in Indonesia is well underway. Once complete, it will include:

These are truly exciting times at the SRS! Recently, the ambassador pen expansion was completed, meaning Harapan, one of the current resident male rhinos, now has a bigger and better enclosure.

Harapan was the third Sumatran rhino born at the Cincinnati Zoo and Botanical Gardens, and immediately captured the hearts of everyone who met him. In 2015, he traveled from Cincinnati to the SRS to become part of the breeding program on which this critically endangered species now depends. His previous three hectare pen (about 7.5 acres) was a good temporary solution but did not provide enough variety of plant material for him to eat, so the SRS keepers had to hand-cut and deliver 30 kgs of browse to him daily. Now, with the move to his new 10-hectare pen (about 25 acres), Harapan will have access to over 180 edible plant species!

Several IRF staff and board members were present the day Harapan moved into his new enclosure and captured the moment to share with you. Watch Harapan’s first steps (and snacks) in his new home:

Thanks to all our partners including Save The Rhino, Cincinnati Zoo and Botanical Gardens, and Yayasan Badak Indonesia, and to you for your continued support. Together we can save the Sumatran rhino!