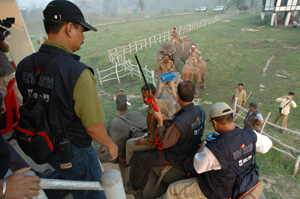 On this day, four years ago, rhino conservationists and veterinarians at the Sumatran Rhino Sanctuary in Way Kambas National Park, on the island of Sumatra in Indonesia, were celebrating the arrival of the first ever rhino calf born in captivity in Indonesia. His birth was the historical culmination of robust international cooperation. His father, Andalas, was born at the Cincinnati Zoo on September 13, 2001 and came to Indonesia when he was six years old. Andatu’s mother, Ratu, was born in Way Kambas National Park, but wandered outside the park’s boundaries in 2005. Fortunately, she was rescued and brought to the Sanctuary for protection. Andatu’s name is a combination of his mother’s and father’s names, but it is also short for an Indonesian term that means a “Gift from God.” At birth, he weighed approximately 60 pounds, but reached 500 pounds – a quarter of a ton – before the end of 2012! He is now fully grown, weighing in at 1,041lbs and lives independently in his own enclosure at the Sumatran Rhino Sanctuary.

Andatu spends his days walking around, wallowing, and snacking on the local vegetation. In addition to the foods he finds for himself in the forest, his keepers provide him with browse from more than two dozen different types of plants, some of which are relatives of the aromatic herbs that people use in cooking and others that are toxic to human beings, but part of a Sumatran rhino’s natural diet. Andatu will reach sexual maturity at about seven or eight years of age.

In celebration of his birthday, Andatu’s keepers will threw him a birthday party complete with his favorite snacks – bananas, sweet potatoes, and watermelon. Happy birthday Andatu!