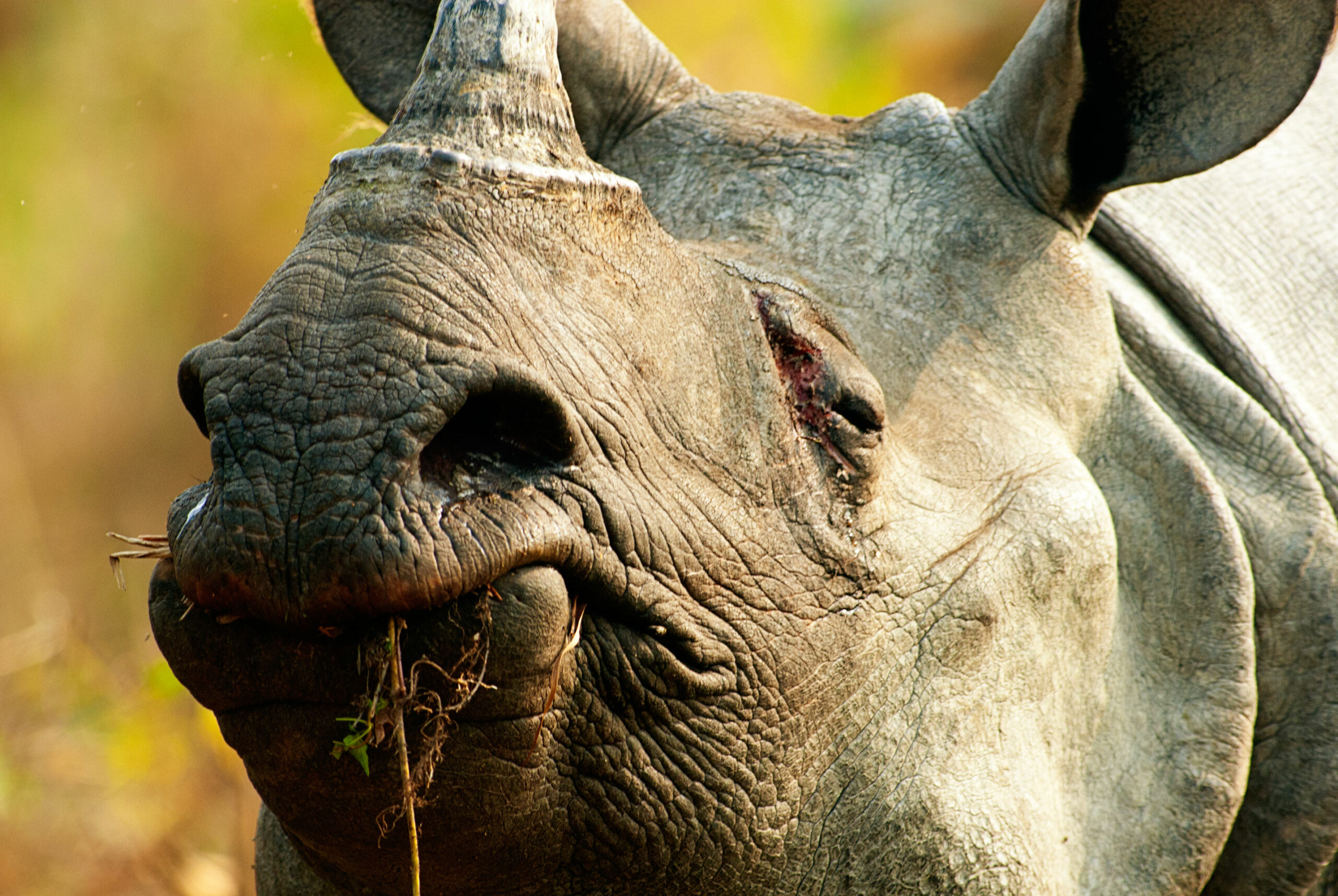 BY NINA FASCIONE, EXECUTIVE DIRECTOR OF THE INTERNATIONAL RHINO FOUNDATION

Jackson, WY is gorgeous in the fall, with aspen trees changing color and a nip in the air. I was fortunate to travel there last week for the Jackson Wild Summit (formerly the Jackson Hole Wildlife Film Festival), an annual gathering of individuals interested in conservation and the environment, and especially how conservation stories are told through film and other media. The nonprofit that runs the summit describes it as a “convening where collaboration and innovation thrive, ideas are launched, and strategic partnerships are forged.”

I found that description to be true, as I met and engaged with other wildlife conservation leaders and enjoyed being at my first in person conference since before the pandemic began (kudos to Summit organizers, who took every COVID precaution from testing to masks).

The theme of this year’s Summit was rewilding, the concept of restoring degraded land or missing species to their natural state, and I was pleased to be part of a panel session on wildlife rewilding, during which I gave a talk on the greater one-horned rhino restoration success story. My fellow panelists included Dr. Doug Smith, project leader for the wolf restoration project in Yellowstone National Park, Adrea Crosta, the executive director of Earth League International telling the alarming story of the imperiled vaquita, and Dr. Oliver Ryder, director of conservation genetics at the San Diego Zoo Wildlife Alliance, discussing the reintroduction of Przewalski’s horses in Mongolia, China, and Kazakhstan.

Jeff Flocken, President of Humane Society International and panel moderator, introduced my talk as the biggest success story of the panel. And indeed, greater one-horned rhinos, which were on the brink of extinction 100 years ago with fewer than 100 left in the wild in northern India and the lowlands of Nepal, now number 3,700. This number includes Nepal’s 752 rhinos, most of them in Chitwan National Park, which is an increase of 107 animals from their last census in 2015.

This remarkable comeback story is thanks to active measures by the governments of India and Nepal, along with a broad coalition of nonprofit organizations, scientists and others. One of the main programs that created this recovery success was India Rhino Vision 2020, or IRV 2020, which started in 2005 for the purpose of restoring rhinos to the state of Assam in northern India.

The goal of IRV 2020 was to increase the rhino population in Assam to 3,000 by establishing populations in new areas. Among other efforts, the program successfully re-established a new population in Manas National Park, where rhinos once lived but had been poached out, and now thanks to conservation efforts now has 47 rhinos.

The greatest threats to rhinos continue to be poaching for rhino horn, small populations that increase the risk of disease or disaster, and invasive plant species that limit habitat and resources. In fact, on the invasive species front, of the 100 most destructive invasive plants in the world, 11 occur in India and many of these have invaded the grassland habitats in which rhinos thrive, choking out native rhino food plants. So a huge part of rhino restoration is habitat management.

To address this challenge, IRF is collaborating with our local partner Aaranyak on a five-year project to remove invasive species. We hire local community members to remove invasives, which is done just before the flowering season in November. After the removal of invasive plants, the area is fenced to protect it from grazing and to facilitate the growth of native vegetation. Then, before the onset of the rainy season in the spring, local community members are hired to plant native grass species. This whole project will not only help rhinos but multiple other species that are grassland dependent.

While most historic rhino bearing areas suffer from limited populations, Kaziranga National Park has the largest, most concentrated population of rhinos, housing about 70% of the world’s greater one-horns. Kaziranga may have reached carrying capacity, but the greatest threat is having such a large percentage of a species’ population in one place: if a disease or disaster hits that park, it could wipe out the entire population.

On the poaching front, the government has strict measures in place to protect rhinos, and IRF maintains a team in India that does intelligence and law enforcement work, which includes training and assistance with wildlife crime investigations and the operation of intelligence networks. These combined efforts have contributed greatly to the reduction in poaching in Assam – in 2013 there were 42 poaching incidents and in 2020 there were only two in the same region, a huge decline.

Building on IRV2020, a coalition of government, community partners and NGOs, including IRF, are currently developing a new strategic program for India’s rhinos to bring the number to 4,500 in the next decade. The new plan will be released later this year. The plan will include annual translocations, protection measures, wildlife crime investigation and enforcement, restoration of degraded habitat through invasive species management and partnering with local communities to create benefits from wildlife conservation programs.

Protecting critical rhino populations will also safeguard numerous other threatened species and will create opportunities for local communities to increase their income through jobs in protected area management, habitat restoration programs, wildlife protection and ecotourism. The Bodoland Territorial Council, the governing body of the autonomous region on the India/Nepal border in Assam, is a partner in the project and facilitates relationships with local communities. Local people have been hired, trained and equipped as guards in Manas National Park. IRF and others have also funded alternative livelihood development projects in villages surrounding Manas.

The Jackson Wild Summit provided an excellent opportunity not only for me to be “out in the world” again, but to highlight the remarkable comeback of the greater one-horned rhino. The lesson learned is it takes a village, and beyond, for the type of success story we’ve seen with this species. We look forward to the next few years of continued restoration achievements for these cute “chubby unicorns.”