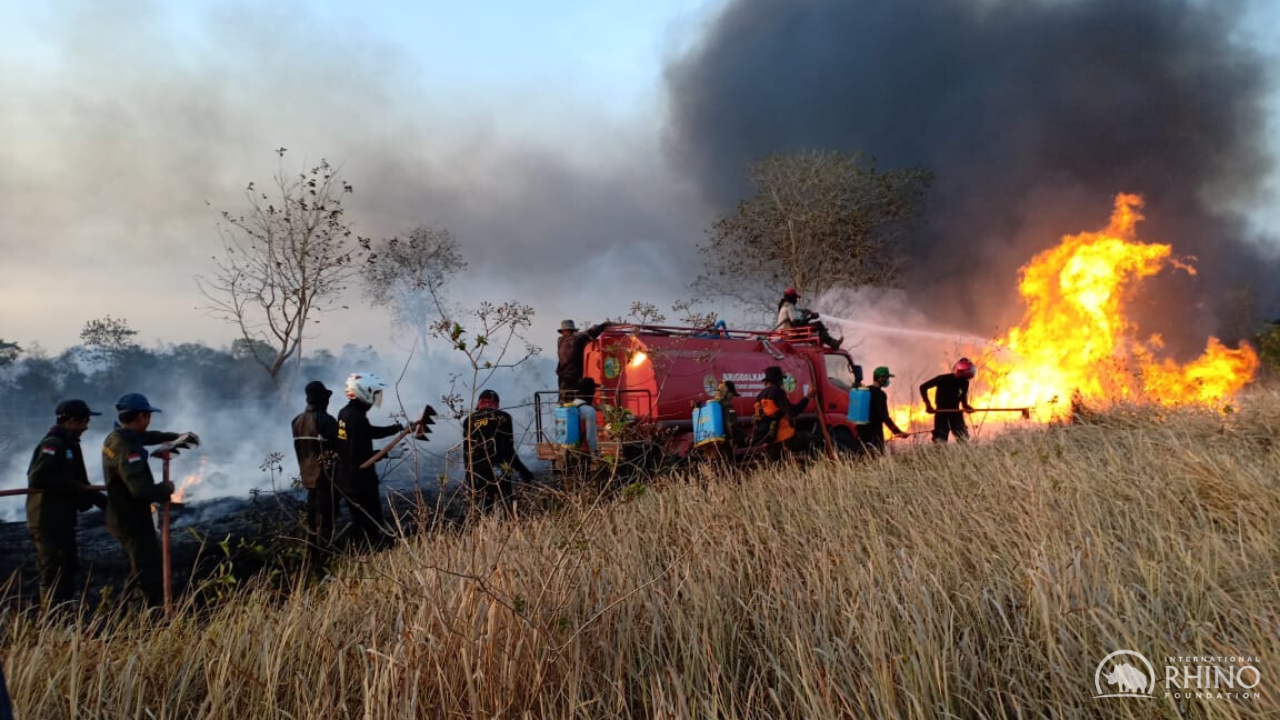 On a November evening in Indonesia, Sectionov, IRF’s Indonesian Coordinator, got a call that he was hoping wouldn’t come. Fires, started by humans, had been burning in Way Kambas National Park in Sumatra, Indonesia for weeks and aided by a strong wind and dry conditions, they were approaching a recently replanted area of the park.

2019 may go down as the worst year for wildlife habitat lost to fire, with large blazes decimating the Amazon in Brazil, Australia, California, Central Africa, and even Siberia. Last year, according to Global Forest Watch, SouthEast Asia lost some 8.9 million acres of primary rain forest—an area equal to the size of Belgium.

Deforestation has been a leading cause in the increase of fires worldwide. Climate change has extended the dry season, increasing the risk of larger, more intense fires. In Indonesia, where deforestation has declined recently, reforestation and recovery efforts have not been able to keep up with past decimation, leading to wildfires in degraded lands.

Increasingly, fires are being set by humans. In Way Kambas, poachers often use mosquito coils to light brush and smoke out game. The corresponding fires distract rangers as they race to assist the park to protect the habitat, allowing the poacher to move unseen.

That November phone call was from park rangers. Sparks from one of the spreading fires leapt the fire break and dry grass had ignited. The flames swept by the wind had burned 25 hectares of recently planted seedlings. It was an entire loss.

Park rangers did everything they could to save the newly planted area that was to grow into an expanded habitat for rhinos, elephants, and tigers as well as other wildlife. In fact, wildlife had already begun to move into the area and the team had photographs of a tiger moving through the restoration plot.

Rhino Protection Units in the area joined the rangers in fighting the fire. The reforestation project had been a community effort. Local students came on field trips to learn about the rainforest and plant trees. The park rangers assigned to the reforestation project designed their own team logo and patch for their uniform featuring a rhino. The pride in transforming an area that was deforested over ten years ago was palpable.

Sectionov went through a range of emotions. He was sad to see the community’s hard work wiped out in a single day. He was mad because this fire was not a natural disaster, but caused by humans. However, these emotions began to take a different form – that of hope.

The plants were gone, but the spirit of the people remained. Within weeks, the park rangers and communities were back at work, clearing the site again, planting more seedlings – larger ones this time, that will be better able to withstand fire. They’ve already built wider firebreaks, dug another deep well, and purchased more firefighting equipment.

The entire community values this reforestation site. They have come together again and are determined to overcome the difficulties inherent in reforestation work. This site was originally determined to be an ideal habitat area for not just rhinos, but elephants, tigers, pangolins, sun bears, and several species of primates. It is critical we realize this vision.

And IRF is committed to supporting them every step of the way. Together, despite the setbacks, we will continue to create a larger habitat for the Sumatran rhino, and other endangered wildlife.

From June 2nd to June 30, IRF is raising funds to replant as many acres as possible in Way Kambas:

Every $1 donated plants a tree, and we will say thank you to you with a certificate for you to show proudly.

With every $1,000 donated, IRF and its partners will replant an entire acre and recognize you with your name on a sign on location. Join Team Rhino in replanting this 25 acre site.

For more on how the reforestation project got started and how it’s recovering, watch our interview with Sectionov on our YouTube channel, and please subscribe while you’re there!