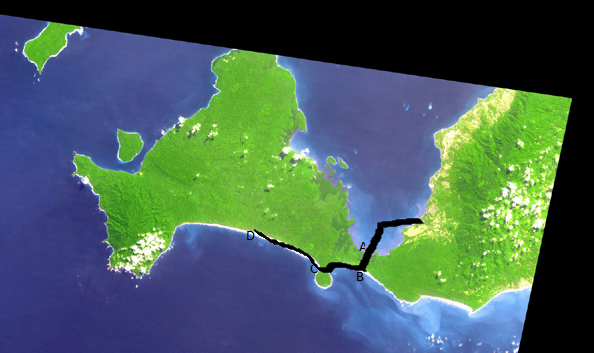 As part of my tasks as Asian Rhino Coordinator of IRF, I often visit rhino bearing sites in West Java for Javan rhinos and Southern Sumatra for Sumatran rhinos. I have been wanting to visit the Southern area of Ujung Kulon National Park for a long time and planned a visit to the southern area of UKNP with Pak Waladi and the UKNP RPUs (Rhino Protection Units). I started my journey to UKNP from Bogor on the 3rd of May 2016 around 7 AM. We reached Taman Jaya – a village close to UKNP around 4 PM. We had a brief meeting with the RPUs at the RPU base camp near UKNP.

On the morning of the 4th of May, we started our journey by RPU boat from Taman Jaya to a point along the narrow landmass that connects peninsular UKNP with Gunung Honje. After getting down from the boat, we had to walk about 30 minutes from the northern part (Point A) to the southern part to reach Karang Ranjang resort (Point B) of UKNP.

After having lunch at Karang Ranjang, we started our walk through the forest, west, to reach Point C around 3 PM which took about 2 hours. From point C, we walked along the beach towards the west to reach Cikeusik – the area where we intended to camp for the next two nights.

The walk in southern UKNP to Cikeusik was very tiring due to the heat from the sun that made all of us tired. We had to stop in several places to take rests and drink enough water to ensure that we weren’t dehydrated. Walking in loose sand and muddy sand is also challenging as it greatly reduces normal walking speed. We arrived at Cikeusik around 8 PM and all of us were so tired that no one was eager for dinner. But since the dinner was cooked, we had some food and went to sleep in temporary sleeping arrangements made by the RPUs in the forest close to beach in southern area. At night it rained moderately.

Stay tuned for Part II of Bibhab’s jouney on our blog next week.

Bibhab serves as IRF’s Asian Rhino Program Coordinator, overseeing our work in Indonesia and India. He is Chair of the IUCN SSC Asian Rhino Specialist Group, and Secretary General of the Indian NGO Aaranyak. He has been involved in rhino research and conservation in Asia since 1996.