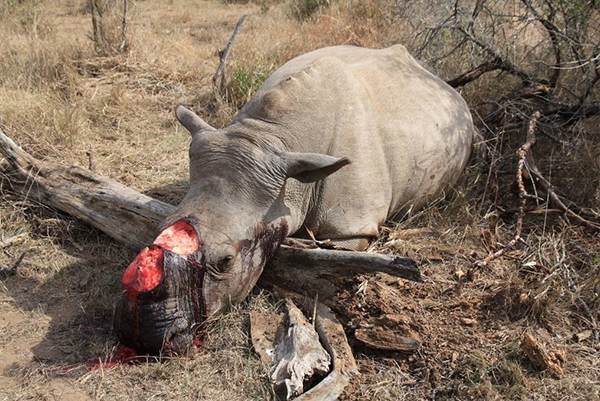 As the International Rhino Foundation re-launches Operation: STOP POACHING NOW, we have carefully considered how to tell the story of the unspeakable fate met daily by poached rhinos. While we don’t usually show graphic content, we believe that you as our supporter deserve to see, once in a while, what and whom we’re up against. We’ve invited our colleague Mick Reilly, Head of Conservation and Security from Big Game Parks in the Kingdom of Swaziland, to share his first-hand experience with the poaching crisis as part of an in-depth article in multiple parts to be published here on our blog. Here is Swaziland’s story.
**Please note that this post includes graphic photos and descriptions that sensitive readers may find disturbing.


On April 2, 2009, a 26-year-old South African male, was arrested for the illegal possession of a high-caliber firearm and the poaching of five rhinos at Songimvelo Nature Reserve, Mpumalanga, South Africa. Ten different cases against this suspect were opened at various regional police stations. He was granted bail in the subsequent hearing and then went on to kill or wound another seven rhinos in Songimvelo, as well as at the nearby Nkomazi Wilderness Reserve. A total of 12 rhinos were killed and an additional three orphaned calves subsequently died. This man had previously been employed as a game ranger at Nkomazi Wilderness Reserve.
An arrest warrant was issued when the suspect failed to appear in court on July 21, 2010. All of the stolen goods that he accumulated from rhino horn dealings were confiscated and forfeited according to South African law, including farm equipment, household goods and entertainment equipment.
Another South African case was opened against the suspect after he and others were accused of abducting and kidnapping one of their own syndicate members whom they severely assaulted on suspicion of being a police informant. They dropped their victim on the side of the road near Badplaas, expecting that he would die of his injuries. Somehow he survived to relay his near-death experience to the police.
On October 10, 2010, the suspect was arrested again in South Africa, this time with his brother and another accomplice. The trio were charged with the illegal possession of an AK-47 and a .303 rifle.
On March 17, 2011, the suspect and his brother as well as a third suspect escaped from police custody by sawing through the bars of the Badplaas police cells using a hacksaw blade. Then, on the evening of June 3, 2011, the suspect, a former Swazi ranger,  and a third South African-based suspect killed the first rhino to be poached in Swaziland in 20 years, fleeing with her horns. This female’s dependent calf also subsequently died.

Two Swazis, the former ranger and a Jericho Reverend, and a third suspect were arrested and charged with the offenses related to the first poaching event. At least three South African suspects, were wanted for this same incident and were believed to have crossed back into South Africa shortly after poaching the rhino, together with the rhino horns and the AK-47 assault rifle. A .300 Winchester Magnum and a .22 rifle — both illegal, unlicensed and suspected to be stolen — were later recovered by the investigating team. The weapons had been hidden in anticipation of further poaching incursions into Hlane Royal National Park.
In June 2011, two alert South African policemen traveling on the road between Badplaas and Oshoek noticed three suspicious men close to the road. As they approached the group, the three men fled, dropping two bags. One of the bags contained an AK-47 assault rifle and rhino poaching equipment. Two of the suspects were identified as the two brothers. Information gathered from this incident confirmed that the three suspects were on their way back to Swaziland to poach more rhinos.
At midnight on September 28, 2011, the brothers struck again at Hlane RNP, poaching the second rhino cow — who was pregnant — and removing the horns. Then about 20 hours later, south of Hlane RNP, the two were shot and mortally wounded, together with a third suspect, in a shootout with police. The two rhino horns were recovered together with two illegal, and suspected stolen, high-powered firearms (a .375 Holland and Holland Magnum and a semi-automatic .223 Ruger repeater — both with thread to fit silencers).

These Swaziland incidents followed the strategic decision by Swaziland’s neighbor, South Africa’s Mpumalanga Parks and Tourism Board, to capture and remove all the rhinos from Songimvelo Nature Reserve to a safer location at a huge expense, due to the severe and persistent poaching threat posed by the suspects. They also followed the tactical decision by the South African National Parks (SANParks) and the South African Government to deploy the South African National Defence Force into Kruger National Park (KNP) in 2010, where any suspected poachers are now met with an aggressive military response as rhino poaching by heavily armed poaching gangs continues to escalate.
With potential poaching targets having been moved out of the brothers’ preferred poaching area, and the aggressive tactics employed in the nearby KNP, (reportedly 13 poachers shot and mortally wounded in 2010 and 20 in 2011, while South Africa lost 333 (146 from KNP) rhinos in 2010 and 448 (252 from KNP) rhinos in 2011), this syndicate’s attention fell, among other areas, on Swaziland’s Hlane Royal National Park, a perceived “soft target”.
At about this time, South African authorities were attempting to trace and arrest the brothers through the use of the South African Police Service (SAPS) Tactical Response Team (TRT), a specialized South African police unit used to arrest especially dangerous criminals. The South African Authorities had good intelligence that the “Kingpin” brother stated that he would not go back to jail and would shoot his way out of any attempt made to arrest him. The suspect’s brother, along with two other suspects had been placed on Interpol’s I 24/7 Red Notice for most wanted criminals, as their criminal poaching activities had taken on international dimensions. Here is more information about the other two criminals:
The first additional suspect was the alleged trigger man in the first rhino poaching event in Swaziland in 20 years. He is a Swazi citizen, who leads a criminal career in and around the Barbeton gold mines in South Africa where he employs gangs of illegal gold diggers and allegedly has dozens of illegal firearms. He has also been listed on Interpol’s I 24/7 Red Notice for extradition to face criminal trial in Swaziland.
The second additional suspect is a career criminal from Mpumalanga, South Africa who is listed on Interpol’s I 24/7 Red Notice and also faces extradition for criminal trial in Swaziland for his part in the poaching of the first Swazi rhino in 2011.
Return here to our blog tomorrow to continue reading our Profile of a Poacher series. Again, please be advised that this series contains graphic content that may be disturbing.
You can help bring these criminals to justice by supporting Operation: STOP POACHING NOW. Every gift, large or small, helps. Every gift allows us to do more.