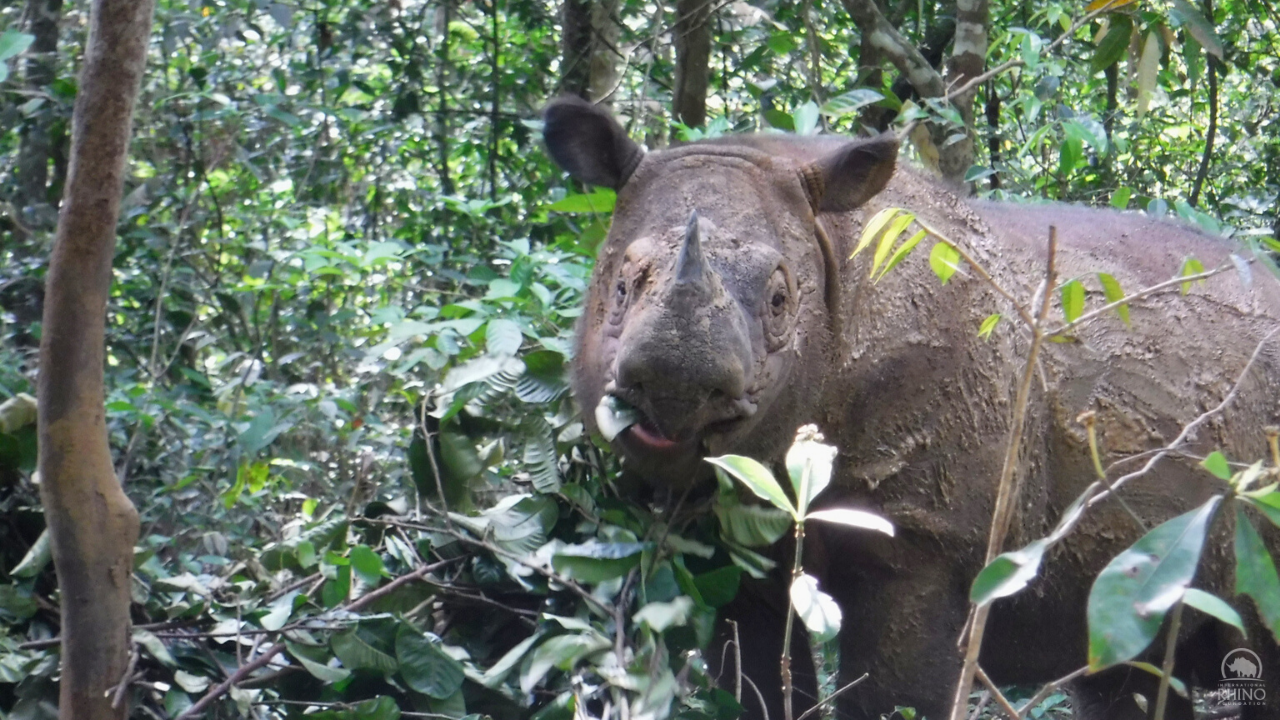 Today, we mark the 2022 Earth Day Celebration. This year’s theme is Investing in our Planet and the International Rhino Foundation (IRF) needs your help to restore healthy habitats for wildlife, an investment in the future for people and animals.

Rhinos are known as an umbrella species. Vegetarians, they spread seeds from their diets, regenerating plants across a habitat, maintaining a healthy ecosystem. However, they can’t on their own reverse the damage done by loss of habitat and invasive species. That is where you can help.

The Sumatran rhino, a Critically Endangered species with fewer than 80 individuals, can only be found in tiny rainforest pockets on the Indonesian islands of Sumatra and Kalimantan. Experts estimate that Way Kambas National Park on the island of Sumatra holds one of only two wild populations in the world large enough to reproduce and sustain itself.

Way Kambas is also the only protected area in Indonesia with no buffer zone – villages surround the park on all sides, and human settlements have frequently encroached into the park, destroying the habitat that rhinos and other wildlife need to survive. Sadly, around one-third of the rhinos’ rainforest habitat has already been lost to deforestation.

In late 2018, Way Kambas National Park, IRF and Yayasan Badak Indonesia (YABI), a local foundation, began a pilot project to restore degraded habitat and reforest it with rhino and elephant food plants. Because rainforest species grow quickly, the replanted forest should be mature enough for rhinos within just four or five years – and our experience elsewhere has shown us that rhinos are experts at quickly finding and taking advantage of new habitats.

Local workers were also hired, including individuals with disabilities who may have trouble finding other types of work, to plant seedlings and maintain the area. Rhinos’ preferred foods are planted in the core of the restoration area. On the outside, bordering the village, locals plant fruit trees (including jackfruit – loved by humans and rhinos) that they can later harvest to eat or to sell.

One of the most significant landscape-level threats to rhinos is the prevalence of invasive plant species, which choke out native rhino food plants and limit the amount of habitat available for rhinos and other wildlife. In India, IRF collaborates with partner Aaranyak and local community members to remove invasive plants from Manas National Park, where around one-third of the rhinos’ grassland habitat has already been taken over by invasive species. Over the past year, local community members successfully restored 50 acres of prime rhino habitat.

In 2021, IRF expanded our habitat management efforts to Nepal where invasive species are threatening greater one-horned rhino health and habitat. We are working with a local NGO, the National Trust for Nature Conservation (NTNC) to restore rhino habitat in Chitwan National Park, home to the second largest population of greater one-horned rhinos in the world. Grasslands in Chitwan’s alluvial floodplains provide excellent habitat for rhinos, but this prime habitat is gradually shrinking due to alien invasive plant species. NTNC will hire local workers to remove invasive species from 625 acres of grasslands over the next two years.

If we can restore more habitats and remove invasive species from existing one, rhinos and other wildlife can thrive for future generations.

If you would like to make an investment in our planet, you can help us plant more trees in 2022 to create more viable habitat for wildlife around the world.