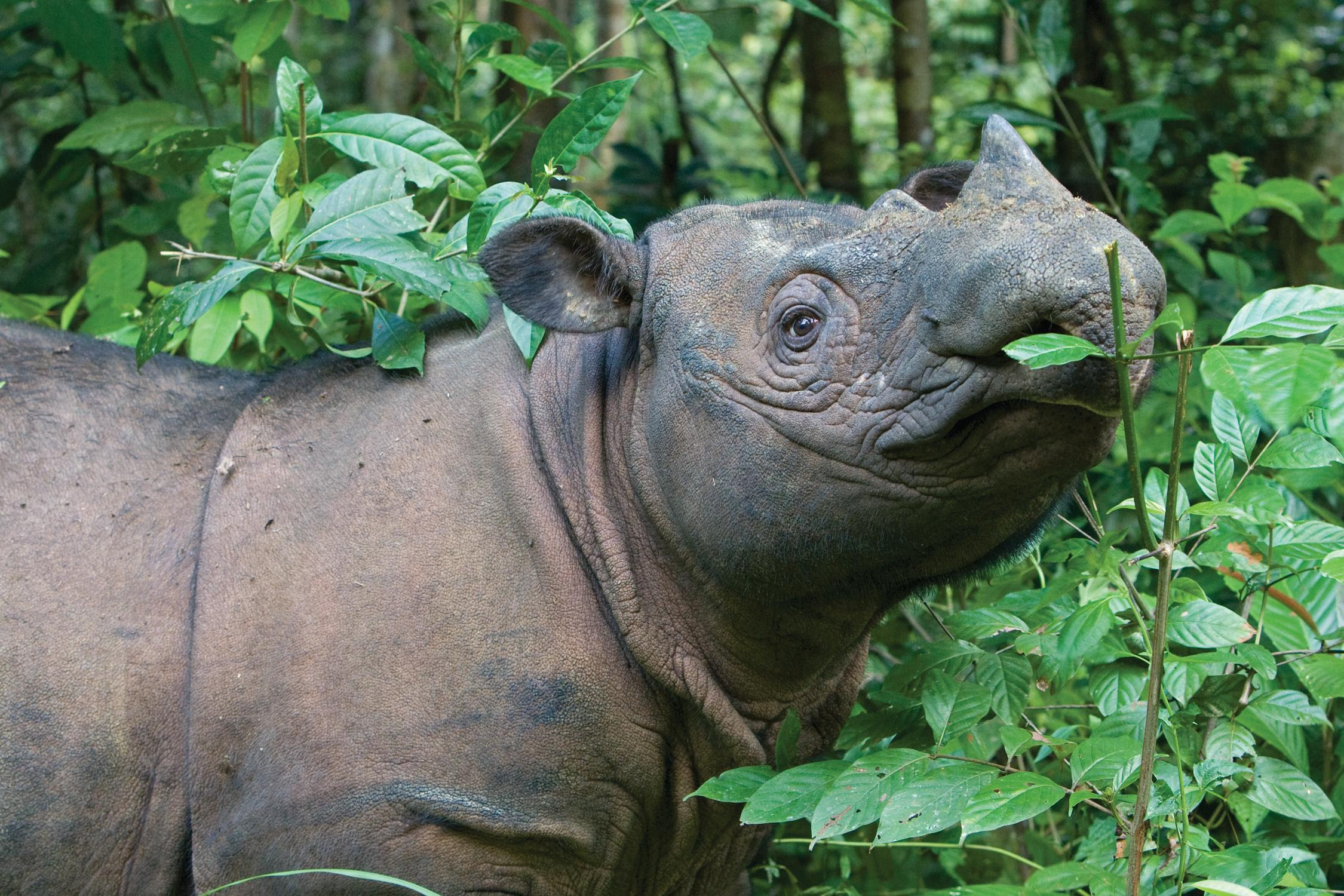 In dense, steamy rainforests on the Indonesian islands of Sumatra and Borneo, Earth’s few remaining Sumatran rhinos are struggling to exist. Barely hanging on in fragmented sub-populations, this rhino is so rare – fewer than 80 survive – that only a handful of people have ever seen one in the wild. The decline of the species was initially caused by habitat loss and poaching for their horns, threats that still persist today.

Despite ongoing protection, the species faces extinction. Sumatran rhinos have become isolated in tiny pockets, decreasing the probability of breeding-age animals encountering one another. There simply aren’t enough rhino babies being born.

We are part of a groundbreaking strategic partnership to save the Sumatran rhino from extinction. The effort was established to support the Indonesian government’s national Sumatran rhino breeding program. With fewer than 80 Sumatran rhinos left in the world, the species is in a race against time. Without intervention, this species will go extinct in a matter of decades.

Despite delays caused by the COVID-19 pandemic, IRF and our Alliance partners have continued moving forward, as safely as possible, with efforts to capture, translocate, and breed Sumatran rhinos. To date, the Alliance has raised nearly $10 million in direct and complementary funding to support training, surveys, captures, and the sanctuaries. Each program region is also receiving additional funding through the Tropical Forest Conservation Act for survey and capture operations.

Rhino experts from around the world and Indonesian government officials agree that the only way to bring the Sumatran rhino back from the brink is to relocate them to managed breeding facilities designed specifically for their care and propagation.

In anticipation of captures of rhinos from small, isolated populations, IRF and local partner Yayasan Badak Indonesia (YABI) doubled the size of the conservation breeding facilities and program at the Sumatran Rhino Sanctuary, which now holds seven animals. Our goal is to quickly and safely increase rhino numbers, creating a source population from which animals can someday be reintroduced into the wild.

“We have more than 24 years of experience maintaining and breeding Sumatran rhinos in captive settings. Using techniques first perfected at the Cincinnati Zoo & Botanical Gardens, and later at the Sumatran Rhino Sanctuary in Way Kambas National Park, we are confident that this project can help to turn around the dire situation facing Sumatran rhinos,” says Nina Fascione, executive director of the International Rhino Foundation.

A fundamental element of the Alliance strategy is building local capacity. Together with our implementing partners, the SRSA has prioritized:

Though the pandemic and travel restrictions have prevented us from holding in-person training, we have held three virtual training sessions on general veterinary practices for veterinarians from all three regions. We plan to hold an in-person capture and translocation workshop in June 2022 with vets and translocation experts from around the world.

During the past two years, the Alliance has created, trained and supported survey teams that are actively tracking rhinos in Aceh, South Sumatra and Kalimantan. Standardized survey methodology is being used in all three regions.

Capture preparations are currently underway and could begin in 2022 with proper approval by the government of Indonesia.

In November 2021, Indonesian government officials and conservation partners broke ground on a new Sumatran Rhino Sanctuary (SRS) in the Leuser Ecosystem in Aceh, North Sumatra. The new SRS will be the third, joining current breeding facilities in Way Kambas National Park in southern Sumatra as well as the small sanctuary in East Kalimantan that houses “Pahu”. The sanctuary is scheduled to be completed by October of 2022.

HOW YOU CAN HELP

While there is always risk, doing nothing is not an option. It is time to act—to be proactive and gather the remaining breeding individuals, produce calves, and reduce the threat of poaching.

It takes a lot to save a species: vision, a plan, persistence… and your support.

We need your help to achieve this vision.

If we don’t act now, the Sumatran rhino could be extinct in our lifetime.

IRF would like to thank the strategic partners that have joined us in supporting this effort: